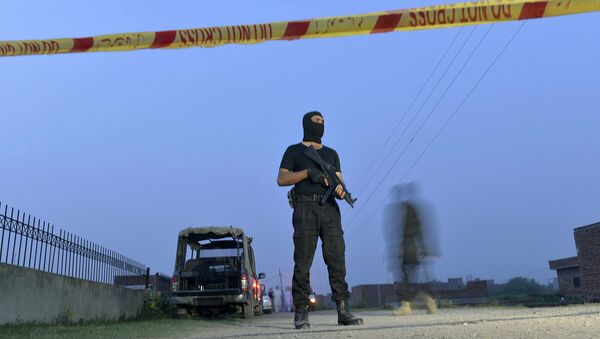 Jamaat-ud-Dawa (JuD), founded by Hafiz Saeed, was declared as an international terrorist organisation by the US in 2014.

New Delhi (Sputnik) — In a major blow to the Hafiz Saeed-led terror outfit, the Pakistan government has taken over Jamaat-ud-Dawa's head offices located in Lahore and Muridke, reports The Dawn.

Pakistan government has appointed administrators at Lahore's Chowburji head office of Jamaat-ud-Dawa and main centre in Muridke in Punjab after seizing the premises from the terror outfit's control.

In addition, the authorities have seized a Jamaat-ud-Dawa seminary in Bajaur district in Khyber Pakhtunkhwa Province, the Dawn reported.

Under pressure from the International community, Pakistan has initiated action against various terror groups operating in Pakistan.

Earlier, Pakistan arrested at least 44 members of the Jaish-e-Mohammad (JeM) terror group, including Mufti Abdul Raoof, the brother of the leader of the group responsible for the deadly attack on an Indian military convoy in the Kashmir region. The attack on the convoy escalated tensions between India and Pakistan to the extent of aerial attacks and cross-border shelling.