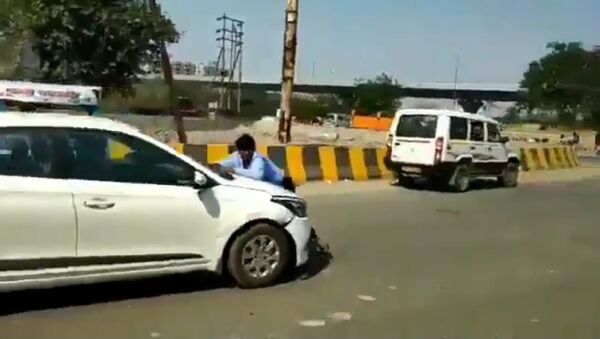 The incident took place at Ghaziabad in the north Indian state of Uttar Pradesh and the driver was later arrested by the police.

New Delhi (Sputnik) — A video of a road rage incident, in which a car is seen driving along a congested road while a man clings to its bonnet for dear life, is circulating on the internet.

#WATCH In a shocking case of road rage seen in Ghaziabad, driver of a car drove for almost 2 kilometers with a man clinging on to the car bonnet. The driver was later arrested by Police (6.3.19) (Note:Strong language) pic.twitter.com/hocrDi7qgg

​From one camera angle, the vehicle can be seen ultimately coming to a halt after its path was blocked off by another car.

The man on the bonnet was still fired up after the car stopped and was seen pounding the vehicle, asking the driver to come out.