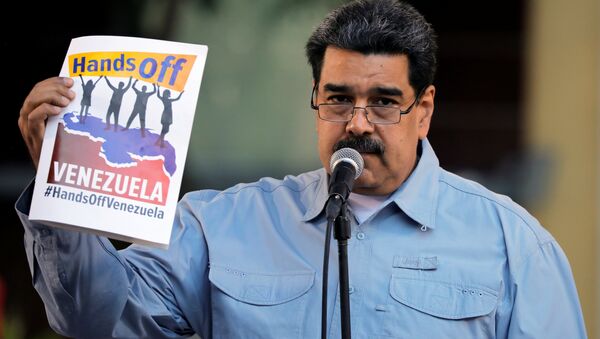 © REUTERS / Carlos Barria
Subscribe
International
India
Africa
US President Donald Trump has so far failed to rule out the possibility of a military intervention in Venezuela, which is in the grip of a power struggle between incumbent President Maduro and opposition leader Juan Guaido.

Over a dozen Democratic representatives have teamed up to condemn Donald Trump's line on the ongoing constitutional crisis in Venezuela, describing the recognition of self-proclaimed interim leader Guaido as a somewhat half-baked decision.

"We write to express out deep concern regarding the Trump Administration's handling of relations with Venezuela, particularly its suggestions of military intervention, imposition of broad unilateral sanctions, and recent recognition of an opposition leader as interim president without a clear plan in place to hold democratic elections and avoid an escalation of violence," reads the letter.

On 23 January, the United States endorsed Juan Guaido, who called for fresh elections and urged Nicolas Maduro to quit. Back then, Donald Trump said that Washington was "not considering anything, but all options are on the table".

The signers fear that this statement could imply a military intervention to oust Maduro and deepen Venezuela's economic crisis.

Condemning Maduro for his alleged oppression of democracy, the Democrats described threats of military action in Venezuela as "simply unacceptable" and possible military intervention as "unconstitutional".

They insisted that Washington's sanctions on Maduro's government — which include the seizure of its assets in US banks — have had a devastating effect on the lives of ordinary Venezuelans.

"Rather than pursuing misguided policies which run counter to our own national interests, the US should instead join other countries in promoting Venezuelan efforts to achieve constructive dialogue and democratic solutions to the current political crisis," they wrote.

"Today Venezuelan government officials can claim that the US is waging an economic war and laying groundwork for direct confrontation, which threatens chaos and mass migration from Venezuela that will be felt throughout the region."

The sanctions, which have worsened the already poor economic situation in the South American country, have so far failed to achieve the main goal of forcing Maduro to step down.

The letter cited Francisco Rodríguez, chief economist at NYC investment bank Torino Capital, as saying that the sanctions instead "made it very difficult to improve the situation" and were partially responsible for the death of Venezuelans, due to increasing the shortage of vital products and aggravating economic destruction.

The letter ended with a call for the Trump administration to change its policy toward Venezuela and abstain from using the military option or "any other form of interference or attempted threat".

Nicolas Maduro himself accuses Washington of endorsing Guaido as a pretext for seizing the country's natural resources; last month, he claimed the United States was trying to "fabricate a crisis to justify political escalation and military intervention in Venezuela".