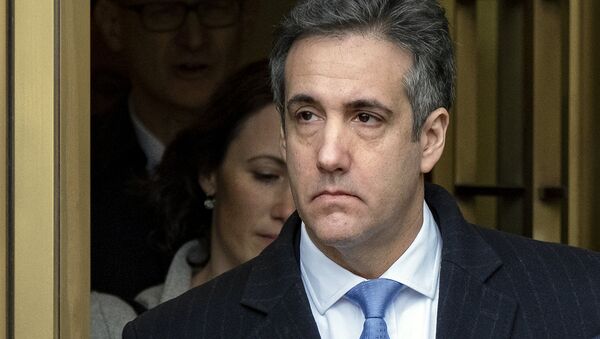 WASHINGTON (Sputnik) - US President Donald Trump said in a statement on Friday that his former lawyer Michael Cohen directly asked him for a pardon and was rejected, and later lied under oath in court about the matter.

"Bad lawyer and fraudster Michael Cohen said under sworn testimony that he never asked for a pardon. His lawyers totally contradicted him. He lied!," Trump said. "Additionally, he directly asked me for a pardon. I said NO. He lied again!"

Trump Blames Cohen Hearing for Failure of North Korea Summit
Trump said Cohen lied in court yet again with respect to whether he desired a position at the White House, saying his former lawyer wanted such a post "badly."

Reacting to Trump's claim that Cohen asked the president for a pardon, the US president's former personal lawyer called it in a Twitter post "just another set of lies by [President Donald Trump]."

This follows last week's hearing when Cohen alleged that Trump played a role in hush money payments to women that may have violated campaign finance laws. He also accused the president of committing crimes including campaign finance violations and potential tax fraud.

Last year, Cohen was sentenced to three years in prison for lying to Congress, fraud, tax evasion and making unlawful campaign contributions, including "hush money" payments to women who claimed they had relations with Trump.

He is due to report to prison on May 6.