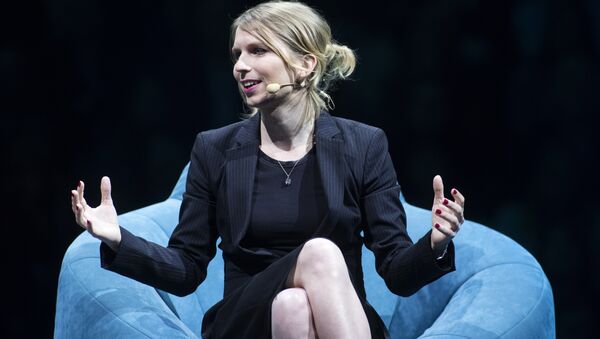 US whistleblower Chelsea Manning issued a statement shortly after her arrest Friday, confirming that she has no intention of complying with the grand jury she's been summoned before. The grand jury wants to question her with regard to her 2010 public disclosures of military and diplomatic secrets.

"I will not comply with this, or any other grand jury. Imprisoning me for my refusal to answer questions only subjects me to additional punishment for my repeatedly-stated ethical objections to the grand jury system," the statement reads.

​"The grand jury's questions pertained to disclosures from nine years ago, and took place six years after an in-depth computer forensics case, in which I testified for almost a full day about these events. I stand by my previous public testimony."

Manning went on to note that she "will not participate in a secret process that I morally object to, particularly one that has been historically used to entrap and persecute activists for protected political speech."

The whistleblower's statement came after she was arrested Friday when a federal judge found her in contempt of court for refusing to respond to any and all questions before a grand jury.

Moira Meltzer-Cohen, Manning's attorney, told reporters outside a federal courthouse in Virginia that her client can be held for the term of the grand jury, noting that Manning's detainment can't last more than 18 months.

However, when asked whether Manning would be held for the full 18-month period, Meltzer-Cohen said that "we are not there yet."

"As everybody knows, Chelsea has tremendous courage," the attorney said. "Our primary concern at this point is her health while she is confined, and we will be paying close attention."

Manning appeared Wednesday before a grand jury at the US District Court for the Eastern District of Virginia, but refused to answer questions, citing the First, Fourth and Sixth Amendments of the US Constitution, Sputnik previously reported.

"The court's decision to imprison Chelsea Manning for refusing to comply with a grand jury is pointless, punitive, and cruel," a statement from Manning's Support Committee reads.

"It is no secret that members of the current administration have openly expressed their hatred for Chelsea. Donald Trump himself has tweeted about his desire to undo Barack Obama's commutation and put Chelsea back in jail. We reject the logic that Chelsea should comply and answer questions regarding events for which she has already provided ample testimony, and we condemn the government's punitive efforts to back her into a corner."

According to Law & Crime, the case that Manning's testimony was requested for is being handled by the US Attorney's Office for the Eastern District of Virginia, the very same US attorney's office that previously accidentally pasted language referring to possible criminal charges against WikiLeaks founder Julian Assange into legal documents about a separate case. Although the office did own up to the mistake, it did not confirm or deny whether charges were going to be filed against Assange, who is currently staying put inside the Ecuadorian embassy in London out of fear of being extradited to the US.

Ann Wright, a former US State Department official who resigned in protest of the invasion of Iraq, told Radio Sputnik's Loud & Clear on Friday that she was "horrified" to learn of Manning's arrest. She also indicated that any information regarding Manning's knowledge of the 2010 disclosures were already detailed in government records.

​In response to the latest development, friends and associates of Manning have created a fund to help cover any of her legal costs.

Manning was previously sentenced to 35 years in prison for handing over internal documents to WikiLeaks. Her sentence was commuted by then-US President Barack Obama in 2017 as one of his last official acts. She served seven years behind bars.