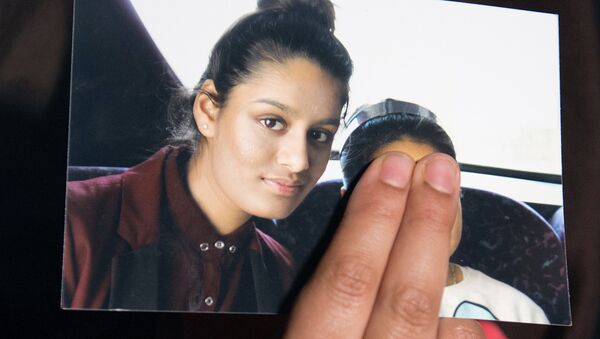 © REUTERS / Laura Lean/Pool
Subscribe
If the reports are confirmed, then it would mean that Miss Begum has lost all three of her children that she has given birth to since arriving in Syria in 2015.

British Daesh* bride Shamima Begum's baby is believed to have died in Syria, her family's lawyer has announced.

Mohammed Tasnime Akunjee said on Twitter that he had received "strong" but "unconfirmed" reports that Miss Begum's baby boy, who was born barely a few weeks ago, has died.

We have strong but as yet unconfirmed reports that Shamima Begums son has died. He was a British Citizen.

Miss Begum entered the Al-Hol camp for displaced Daesh families in Syria's north after fleeing the brutal fighting that was taking place in the group's last stronghold of Baghuz, on the east bank of the Euphrates river.

Miss Begum has said in past interviews that her son, whom she named Jarah, was her third child after the previous two had died in Syria.

He was a British citizen. But sadly, awfully, tragically, he was born amidst the literal landscape of IS due to the actions of his Mother and faced the worst chance in life.

Very sad indeed! Also feel sorry for the 5000 Yazidi men and women, killed at the hands of #ISIS who will never have the chance to have children.

Mr Akunjee announced earlier on in the month that Miss Begum had relocated from Al-Hol to another area near the border with Iraq after getting death threats from other Daesh brides in the camp for showing her face on camera and speaking to the international media.

Begum herself has expressed regret speaking to the media, telling the Sunday Telegraph in a February 24 interview that the UK government had only stripped her of her citizenship because she had received significant media coverage, pointing out that other Daesh brides and their children had been allowed to return to the UK from Syria.

"I feel like I've been discriminated against because everyone was saying I was a poster girl for ISIS. I'm being punished right now because I'm famous. I regret speaking to the media. I wish I had stayed low and found a different way to contact my family," she said.

I can't even get my head around this. That baby has been innocent in all this. What a waste of a life. I absolutely hate this world sometimes

It's unfortunate that his mother made herself an enemy of the UK, via the actions she chose. She is responsible for his death, not the UK.

As the inevitable territorial defeat of Daesh approaches, thousands of families have fled from Baghuz to the Al-Hol camp for refuge, which reportedly now houses upward of 62,000 people.

The reports about Miss Begum's child came as it was announced that 100 people have died over the past two months on the way to the camp or shortly after arriving, two thirds of whom were babies and infants.

Very sad news, as is the death of any child. As a parent this strikes home, forget the political posturing and blaming, just for once think of the child.

If true of course sad, but his mother made a conscious choice where she wanted to live and her ambition was to marry a Jihadi and start a family, she bears responsibility

READ MORE: Shamima Begum's Husband Wants to Go Back to Netherlands With Her & Newborn Son