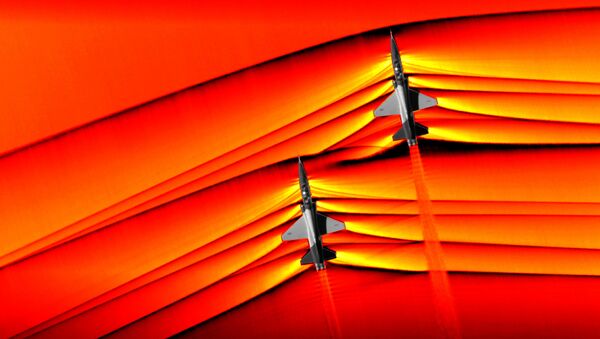 The US space agency NASA has published high quality images of the shockwaves from two supersonic jets interacting - the first time this dynamic has been photographed. Once ready, the equipment that generated the images will be used to evaluate the X-59, a test plane designed to fly at supersonic speeds but without the loud sonic boom.

The high-speed cameras, taking 1,400 pictures per second, captured the stunning photos, which show air being compressed in front of the jets as they exceed the speed of sound. The dynamic causes the sound waves to "pile up," so to speak, which generates a shock wave that rips through the atmosphere, registering on the ground as a boom. 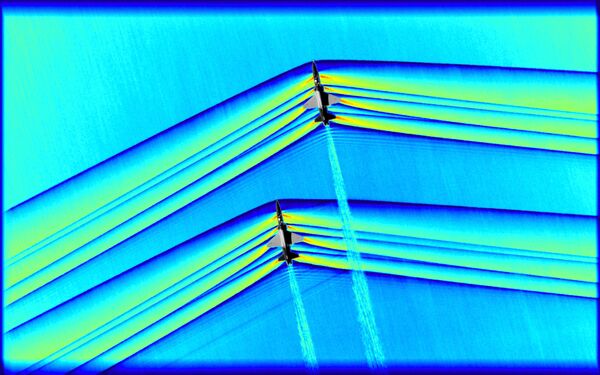 One of the greatest challenges of the flight series was timing. In order to acquire this image, originally monochromatic and shown here as a colorized composite image, NASA flew a B-200, outfitted with an updated imaging system, at around 30,000 feet while the pair of T-38s were required to not only remain in formation, but to fly at supersonic speeds at the precise moment they were directly beneath the B-200. The images were captured as a result of all three aircraft being in the exact right place at the exact right time designated by NASA’s operations team.
© NASA . NASA photo

"The T-38s are flying approximately 30 feet away from each other, with the trailing aircraft flying about 10 feet lower than the leading T-38. With exceptional clarity, the flow of the shock waves from both aircraft is seen, and for the first time, the interaction of the shocks can be seen in flight," the release says.

"We never dreamt that it would be this clear, this beautiful," physical scientist JT Heineck of NASA's Ames Research Center said in the release. "With this upgraded system, we have, by an order of magnitude, improved both the speed and quality of our imagery from previous research."

"We're seeing a level of physical detail here that I don't think anybody has ever seen before," said Dan Banks, senior research engineer at NASA Armstrong. "Just looking at the data for the first time, I think things worked out better than we'd imagined. This is a very big step."

"We're looking at a supersonic flow, which is why we're getting these shockwaves," said Neal Smith, a research engineer with AerospaceComputing Inc. at NASA Ames' fluid mechanics laboratory. 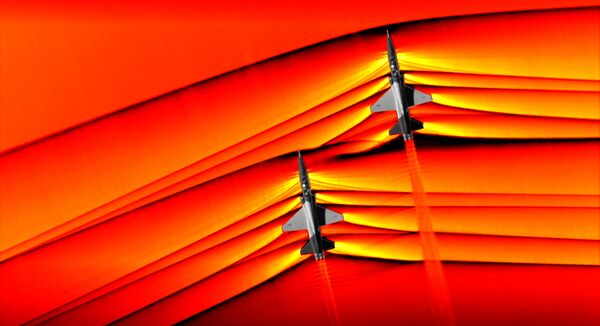 Using the schlieren photography technique, NASA was able to capture the first air-to-air images of the interaction of shockwaves from two supersonic aircraft flying in formation. These two U.S. Air Force Test Pilot School T-38 aircraft are flying in formation, approximately 30 feet apart, at supersonic speeds, or faster than the speed of sound, producing shockwaves that are typically heard on the ground as a sonic boom. The images, originally monochromatic and shown here as colorized composite images, were captured during a supersonic flight series flown, in part, to better understand how shocks interact with aircraft plumes, as well as with each other.
© NASA . NASA Photo

The effect of a sonic boom can range from nuisance to property-destroying. This video from July 2012 shows two Brazilian Air Force Mirage 2000 fighter jets breaking the sound barrier at low altitude, and the sonic boom shattering both the nerves of spectators and most of the windows in the Brazilian Supreme Court Building in Brasilia. Be warned: it's loud.

"What's interesting is, if you look at the rear T-38, you see these shocks kind of interact in a curve," Smith said. "This is because the trailing T-38 is flying in the wake of the leading aircraft, so the shocks are going to be shaped differently. This data is really going to help us advance our understanding of how these shocks interact." 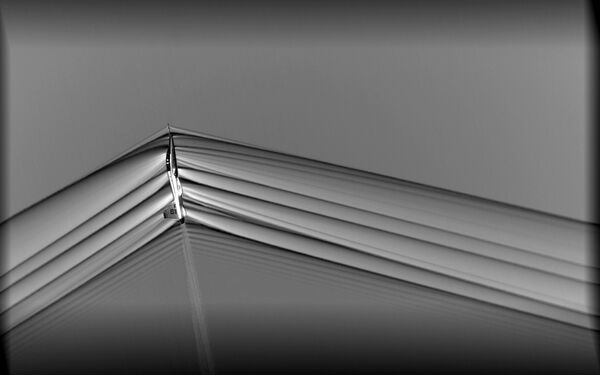 When aircraft fly faster than the speed of sound, shockwaves travel away from the vehicle, and are heard on the ground as a sonic boom. NASA researchers use this imagery to study these shockwaves as part of the effort to make sonic booms quieter, which may open the future to possible supersonic flight over land. The updated camera system used in the AirBOS flight series enabled the supersonic T-38 to be photographed from much closer, approximately 2,000 feet away, resulting in a much clearer image compared to previous flight series.
© NASA . NASA photo

NASA says the ultimate purpose of the test is to use AirBOS to study air waves generated by the X-59 Quiet Supersonic Technology (QueSST) aircraft, a joint NASA-Lockheed Martin undertaking that scientists hope will find a way for jets to fly faster than the speed of sound but without the sonic boom, which also creates drag inhibiting further speed increases.

Lockheed Martin's Skunk Works design bureau hopes to have the X-59 ready by 2021 and boasts its boom will be no louder than a car door closing, Sputnik reported. At present, supersonic travel over land by civilian aircraft is banned because of the problems sonic booms cause.

NASA hopes that with the lessons learned from the X-59 program, a new supersonic passenger airliner can be introduced that can cross the Atlantic Ocean in as little as three hours. Accordingly, the X-59 has been unofficially dubbed the "Little Concorde," after the now-retired French-built supersonic airliner.