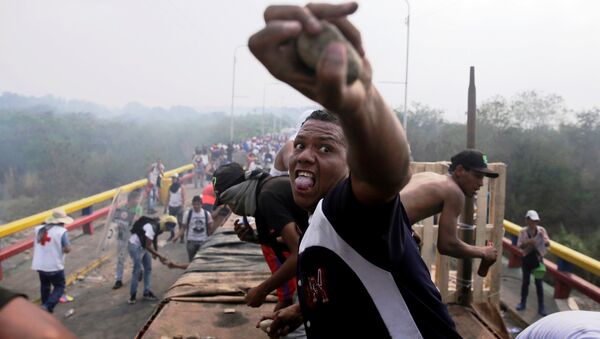 Rob O’Neill’s remarks come after President Nicolas Maduro said on Wednesday that Venezuela is currently faced with “the strongest imperialism of the last 200 years” as well as “economic, political and diplomatic aggression”. Maduro assured that “no one and nothing can break peace” in the Latin American country.

Retired Navy SEAL Robert O’Neill, who claims that he killed Osama Bin Laden in 2014, has predicted fatal consequences for the current political standoff in Venezuela.

“What needs to happen is something along the lines of a coup. As much as I would like to see it [end in a way that is] non-violent, I think it’s going to end pretty bloodily for [Venezuelan President Nicolas] Maduro”, O’Neill told Fox Business.

He claimed that the Venezuelan army is keeping Maduro in power and urged opposition leader and self-proclaimed president Juan Guaido to “turn the military around”.

“The majority of the public, including a lot of the military are for Guaido […] but some of the top leaders […] personally can gain, being greedy with what Maduro gives them, as he's dancing the salsa and people are eating their pets,” O’Neill said.

The speculation comes after President Maduro accused the country’s opposition and the US authorities of being eager to start a war for natural resources.

“They want to seize our natural resources. They want to unleash an ‘oil war’ to invade our homeland and rule here! But they will fail!" Maduro wrote on Twitter on Wednesday.

Earlier, he underlined that “no one and nothing can break peace” in Venezuela, which Maduro said is currently “faced with the strongest imperialism of the last 200 years, with economic, political and diplomatic aggression”.

According to him, Venezuela is also faced with internal aggression, sabotage and “attempts to disrupt the life of the country”.

In a separate development, Juan Guaido recently returned to Venezuela after his trip to neighbouring Latin American states, violating a travel ban imposed on him by the Venezuelan Supreme Court as part of an ongoing probe.

READ MORE: ‘Guaido Is the Bait’: US Tries to Provoke Caracas as Support for Coup Wanes

Attempted Trump 'Armed Aggression' Against Venezuela Failed - Bolivian President
Commenting on the matter, Maduro stated that Guaido, who may now face up to 30 years in prison, should  be put on trial upon returning.

The political standoff in Venezuela escalated on 23 January, when Guaido declared himself the country's “interim president” while Maduro qualified Guaido's move as an attempt to stage a coup orchestrated by Washington.

The US immediately recognised Guaido, with Russia, China, Cuba, Bolivia and a number of other states stressing that they recognise Maduro as Venezuela’s only legitimate president.