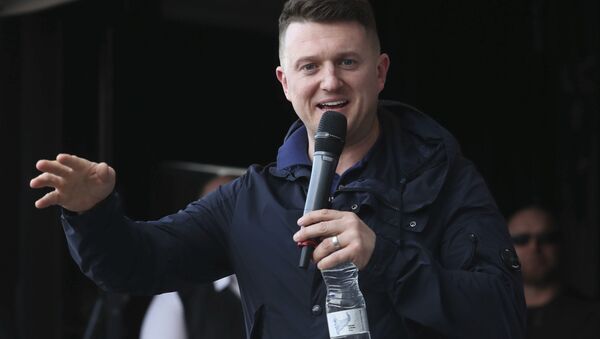 Tommy Robinson - whose real name is Stephen Yaxley-Lennon, faces an allegation that he had committed contempt of court by filming people before a criminal trial.

The Attorney General, Geoffrey Cox, has decided that the former leader of the English Defence League Tommy Robinson should face trial for contempt of court.

On Thursday, 7 March, Mr Cox said the proceedings were "in the public interest".

The first hearing will be at the High Court on 22 March.

In October Judge Nicholas Hilliard QC referred the case up to the attorney general to decide on whether to carry on or discontinue the case.

After that hearing, Robinson, 35, told the cheering crowd: "I shouldn't face another trial. I've been here three times with a prison bag. I've kissed my kids goodbye three times."

In May 2017, Mr Yaxley-Lennon filmed four men outside a court, who were later convicted of gang-raping a teenage girl.

The trial was subject to reporting restrictions and a judge at Canterbury Crown Court gave him a three-month suspended sentence for contempt of court.

In May 2018, he was jailed for potentially prejudicing a court case after broadcasting on social media outside Leeds Crown Court.

He was sentenced to 13 months — 10 months for the contempt of court in Leeds and a further three months for breaching the previous suspended sentence.

Robinson had appealed against both contempt findings.