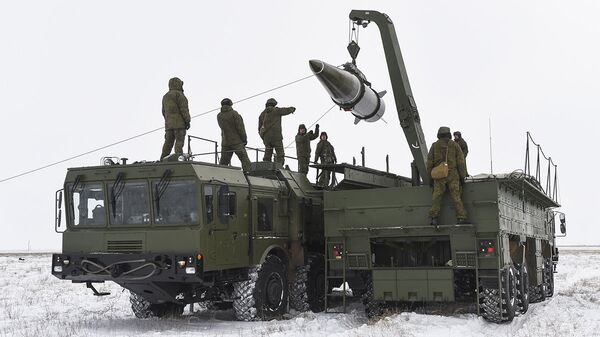 Finand-Swedish military analyst Robin Häggblom suggested that few modern weapons systems can match the Iskander in their ability to create headlines, and not without reason.

First, some of its characteristics remain unknown due to military secrecy. Second, ballistic missiles are hard to defend against, Häggblom contended, finding the Iskander's nuclear capacity particularly worrying.

"The trajectory of the missile is not quite a ballistic one; [the Iskander] can manoeuvre, but it is unable, say, to rise if it is already falling to the ground", Häggblom wrote in an opinion piece in Svenska Dagbladet.

Nevertheless, he called the Iskanders "more than just a ballistic missile", argued that they posed a threat to Russia's Nordic neighbours Finland and Sweden.

"The Iskander can reach very high speeds when the missile is directed downwards, some 2-3 kilometres per second. To be able to shoot down a missile at such speeds, a very advanced air defence missile is required. Also, the missile must be very close to the target," Häggblom contended.

The military analyst questioned the effectiveness of the US-made Patriot air defence, whose acquisition is being touted as one of the single most expensive deals in the Swedish Armed Forces' history.

"How do you defend yourself against these colossi that rain down over strategic targets? Sweden has, as you know, gone to procure the Patriot system, which can both work against aircraft and cruise missiles at a 100 kilometre distance, as well as against ballistic missiles at clearly shorter distances", Häggblom wrote, suggesting that the price tag for four batteries of up to SEK 30 billion ($3.2 billion) was rather high.

Häggblom reminded that Russia, by contrast, has ten to twelve Iskander brigades scattered across the country. A single brigade has twelve vehicles with two missiles apiece, which theoretically provides a volley of 288 Iskanders against an individual enemy.

According to Häggblom, Finland's FGM-158 JASSM cruise missiles and Sweden's Robot 15 may be used to knock out the Iskanders while still on the ground. However, he admitted, this required advanced target information, which poses the question of whether this is feasible in practice.

Lastly, Häggblom also cited Russia's "most well-known cruise missile", the Kalibr, which has a range of 2,000 kilometres and is used by both ground troops and the Navy.

"For the Nordic region, the Kalibr is a problem of at least the same scope as the Iskander, especially since we are within reach of both Russia's Baltic Fleet and Northern Fleet, based in the Arctic Ocean", Häggblom wrote, stressing that the latter is out of reach for most Finnish and Swedish defence systems.

Häggblom also cited suspicions that the Kalibr is utilised by the Iskander-K, which, he alleged, was the crux of the dispute that led the US to abandon the INF treaty on 2 February. Russia followed suit by formally announcing its departure from the INF treaty as a "tit-for-tat" move, accusing Washington of violating the 1987 bilateral agreement that covered short- and medium range missiles.

President Putin strongly criticised the US's withdrawal from the INF and called for striking a balance on global strategic arms. He said Washington should "present convincing evidence" rather than "make far-fetched accusations against Russia" to justify its withdrawal. Putin pointed out that the US had violated the treaty by "deploying Mk-41 universal launch systems that make the offensive combat use of Tomahawk medium-range cruise missiles possible".

Robin Häggblom is a defence and security policy analyst, who runs a blog under the alias Corporal Frisk. He studied mechanical engineering at the University of Oulu and is a member of the Naval Reserve of Central Ostrobothnia.