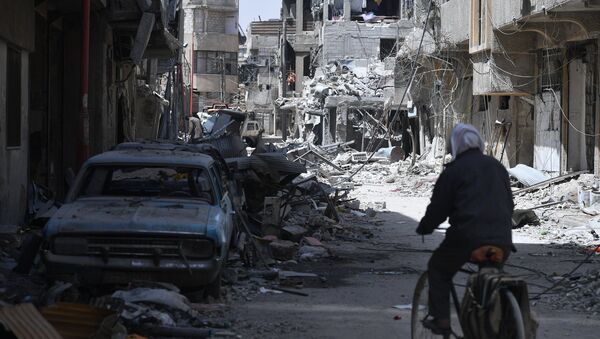 DAMASCUS (Sputnik) - Syrian Foreign Ministry said Thursday that the latest report by the OPCW on the alleged chemical attack in the Syrian city of Douma distorts the facts and was prepared by non-professional and biased experts who ignored the possession of chemical weapons by terrorists.

“This report does not differ from the previous mission reports filled with distorted facts,” the ministry said in a statement.

Syrian Foreign Ministry further pointed out to "the lack of professionalism of the authors of the report," thus, it said "it was easy for the Syrian specialists to discover that the OPCW experts were lying when claiming that they investigated the incident in the report from various aspects."

Moscow Bashes OPCW Report on Alleged Douma Attack as Justification of Aggression
The statement also said that the Organisation for the Prohibition of Chemical Weapons "were far from neutrality and objectivity, as they ignored the possession of toxic chemicals by terrorist groups, although the mission found those substances in the warehouses of terrorists when they visited them."

This comes after on 1 March, the Organisation for the Prohibition of Chemical Weapons (OPCW) published a report by its fact-finding mission on the results of the investigation of the incident in the city of Douma in Eastern Ghouta on 7 April 2018, which claims that a toxic chemical, most likely chlorine, was used in the attack.

In response, the Russian Foreign Ministry said that the organisation had ignored the evidence provided by Russia and Syria, which confirmed that the attack had been staged by the White Helmets. The minister also expressed concern that the document sought to justify the subsequent foreign airstrikes in Syria.