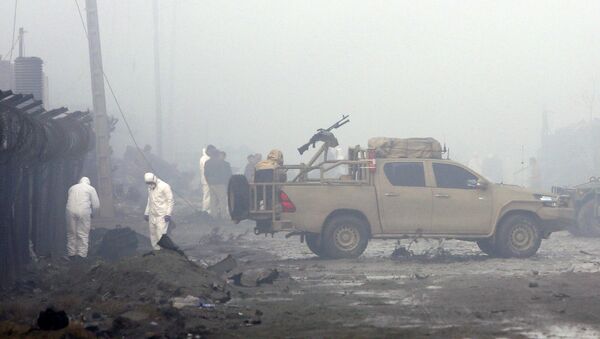 A rally commemorating one of Afghanistan's Shiite minority leaders, Abdul Ali Mazari, at a stadium in Kabul, was disrupted when the crowd was bombarded with mortars during a speech given by Afghanistan's Prime Minister Abdullah Abdullah, Afghan television reported.

One person died and 17 were injured as a result of mortar shelling in Kabul, 1TV reported, citing data from the Ministry of Health.

One of Afghanistan's presidential candidate was injured as a result of an attack in Kabul, the TV channel 1TV reported.

Explosion Rocks Area Near Government Compound in Kabul (PHOTO)
According to TOLOnews, at least ten mortar shells exploded during the attack. Multiple shootings were also heard near the gathering venue, the media added.

Daesh* terrorist group claimed responsibility for the mortar shelling in Kabul, according to 1TV channel.

"We have reports of explosions in the western part of Kabul. Investigations have been launched," said Nasrat Rahimi, a spokesman at the interior ministry.

Several thousand people had gathered at the stadium and the rally was broadcasted live; however, the broadcast was interrupted after the explosions.

In January, at least four people were killed and another 44 were wounded in a bomb explosion in the Green Village area of Kabul.