'Never Seen Anything Like It': Well-Preserved 6500 y/o Skeleton Found in Bavaria 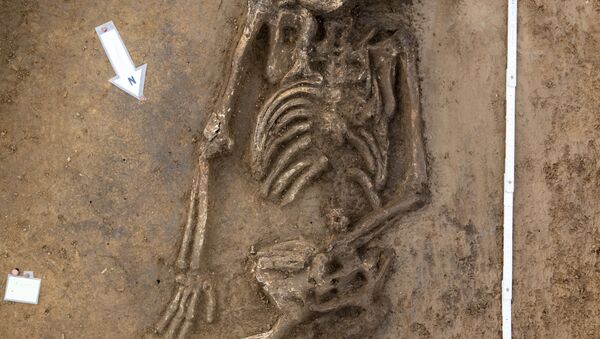 The skeleton, said to be that of a young man who lived during the Neolithic Period, the final period of the Stone Age, was well-preserved thanks to the high concentration of calcium oxide in the soil where he was buried.

Archeologists are thrilled after discovering the remains of an ancient skeleton, whom they christened 'Fred', along with a worn-out stone axe and seeds of grain, in a dig in Lower Franconia, Bavaria, Welt has reported.

Thought to have lived some 6,500 years ago during the Neolithic Period, a period of prehistory during which human beings used stone tools and began to domesticate crops and animals on a widespread basis, Fred probably died at the age of 20 to 30 years old, according to archeologists.

Lead archeologist Scott Tucker was highly impressed by the rare find. "I've never seen anything like it," he said, speaking to Die Welt. The local soil's high calcium oxide content allowed the remains to stay preserved without decomposing as normal.

Fred was found under a cornfield. Excavations were carried out in the area in connection with plans by a local winery to build new facilities in the area. Archeologists have been working in the area since November, inspecting the 13,000 square meter building site before construction begins.

Finding Fred required archeologists to remove only 30-40 centimeters of topsoil. "In Lower Franconia, not much has changed in the ground over the past millennia," Tucker explained.

According to Dr. Heidi Peter-Rocher, a professor of archeology at the University of Wurzburg, Fred's bent leg burial pose was one of several used by communities in the area during the Neolithic Period. Scientists are divided about what the pose could mean, with some speculating that it is meant to emulate humans' position at birth or during sleep.

Science & Tech
Exotic Material Found in Medieval Skeleton's Teeth is a 'Bombshell' Discovery
Along with Fred, archeologists found ceramic plates, remains of food, seashells and other graves. These included the skeleton of a 12 year old boy who was buried in the area some 4,500 years ago at the dawn of the Bronze Age.

As Welt explained, under Bavarian law, archeological finds belong to the land's owners, rather than the state or their finders. Due to the high costs associated with storing and caring for Fred's remains, it's possible that he may be handed over, preserved in the piece of land around him, to a museum. Fred will be taken to Munich for a more detailed study in the coming days.