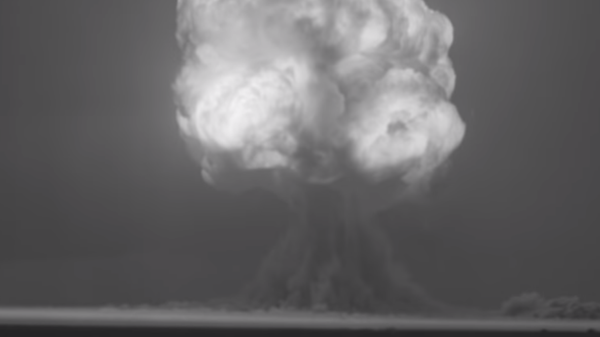 Film footage of US nuclear tests in the country’s southwestern desert from the 1940s and 1950s has been restored, showing some of history’s most powerful weapons blasts in high definition.

YouTuber atomcentral restored footage from the US Federal Civil Defense Administration records of two tests: the infamous 1945 Trinity blast, which inaugurated the nuclear era, and the 1953 Upshot-Knothole Grable test, the only exercise in which a nuclear device was detonated after being fired from an artillery piece.

Trinity was the world's first nuclear weapon to be detonated, tested by the US military in the Jornada del Muerto valley in New Mexico on July 16, 1945. The test was the culmination of the Manhattan Project, a top secret program by the US during World War II to build and test an atom bomb before Nazi Germany, from which many of the program's top scientists had come.

The test confirmed the basic functioning of a fission bomb. The website Trinity Remembered explains it:

"In an atomic explosion, a chain reaction picks up speed as atoms split, releasing neutrons plus great amounts of energy. The escaping neutrons strike and split more atoms, thus releasing still more neutrons and energy. In a nuclear explosion this all occurs in a millionth of a second, with billions of atoms being split."

The Trinity blast was equivalent to 22,000 tons of TNT exploding at once. Because it worked, the US shipped two bombs to the western Pacific, where they were dropped on the Japanese cities of Hiroshima and Nagasaki on August 6 and August 9, respectively, killing roughly 135,000 people and forcing an end to the war. The US is the only country to have used nuclear weapons in combat.

The second test, from May 25, 1953, shows Upshot-Knothole Grable, the only test of a nuclear cannon. However, the cameras in this footage were focused not on the explosion itself, but on the bomb's effects on various objects — in this case, cars, a bus and a tent. If you want to see unrestored footage of the actual test, including the huge cannon that fires the bomb as well as the unrestored version of the car footage, you can watch it here.

The video's focus reflects a concern with the effects of nuclear war — a very real concern by 1953, as the Soviet Union had tested its first nuclear bomb in 1949, only four years after the Trinity test, and the battle lines of the Cold War had been drawn by then.

In the four clips, you can see the stages of impact of the different effects of a nuclear explosion. The first thing to impact the objects is the heat of the blast, which scorches everything facing the explosion. If you look closely, the inside of the bus instantly bursts into flames, and a cloud of melted paint billows around the automobiles. Seconds later, the air blast arrives, imploding the sides of the cars and sending them flying, and totally obliterating the tent.

Grable and most other US nuclear tests happened at the Nevada Test Site, with 928 such tests between 1951 and 1992. Before 1962, those tests were atmospheric, like those filmed here, but concerns about radioactive fallout caused atmospheric testing to be banned, and subsequent tests were conducted underground.

A third video from 1957 restored by atomcentral shows a curious intersection of marketing and munitions: a bank vault built at ground zero of a nuclear test to prove how strong the company's safes are.

According to the blog Conelrad Adjacent, the idea for the gimmick came to Edwin Mosler after a letter was sent to his Mosler Safe Company from the manager of the Teikoku Bank in Hiroshima, Japan, in 1950.

"Your products were admired for being stronger than the atomic bomb," the letter said. The rest of the bank was a crumpled heap of concrete, according to the San Francisco Chronicle.

Never one to pass up such a radioactively hot business opportunity, Mosler arranged for a bank vault to be built at what would become ground zero for the 37-kiloton Priscilla blast on June 24, from the Operation Plumbbob series of tests at the Nevada Test Site. The "bank" was surrounded by a small test city, part of an investigation into which kinds of structures would best withstand a nuclear blast.

Mosler was reportedly so confident in the quality of his safes, he stuffed the Priscilla vault full of real bank notes, just to prove a point. Luckily the safe held out, and neither his money nor his business reputation was obliterated by the explosion.

During another test from the series, dubbed Pascal-B, a 2,000-pound steel cap placed on top of one of the underground test shafts was blown off with such force it was never found. When scientists calculated the force applied to the steel plate, they found it was "six times the escape velocity from the Earth," according to Robert Brownlee, one of the engineers who worked on the project.