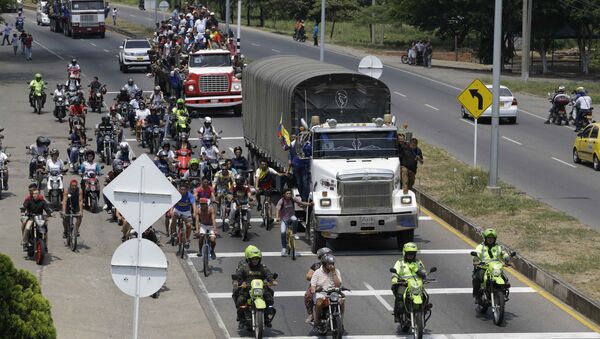 MOSCOW (Sputnik) - Venezuelan Permanent Representative to the United Nations Samuel Moncada criticized Washington on Wednesday for being ready to use any kind of lies in order to justify its attacks on Venezuela.

"Desperate desire to attack Venezuela makes officials of [US President Donald] Trump, his propaganda bodies and his Venezuelan stooges [opposition] repeat any lies that they come across. Fake news is a destructive weapon, albeit an awkward one. Here is an example," Moncada posted on Twitter, adding a link to Sputnik's report about Abrams' conversation with the pranksters.

The pranksters were reportedly trying to discover Washington's plans to oust the legitimate Venezuelan government rather than play a trick on Abrams, who ended up giving the callers a US sanctions list featuring over 100 Venezuelan nationals, including President Nicolas Maduro.

Washington Considering Imposing Secondary Sanctions Over Venezuelan Crisis
His comment came shortly after media reports emerged that US Special Representative for Venezuela Elliott Abrams had a phone conversation with Russian pranksters who claimed to be Swiss President Ueli Maurer. Abrams reportedly called on "Maurer" to block the Venezuelan government's assets in a nonexistent Swiss bank that the prank callers mentioned.

Venezuela's political crisis escalated in January, after opposition leader Juan Guaido declared himself interim president and was backed by the United States, Colombia and Brazil, among others.

Maduro called Guaido a US puppet and accused Washington of plotting an invasion. US National Security Adviser John Bolton said over the weekend that Washington would form a coalition to replace Maduro, who is supported by Russia, China, Cuba and other nations.