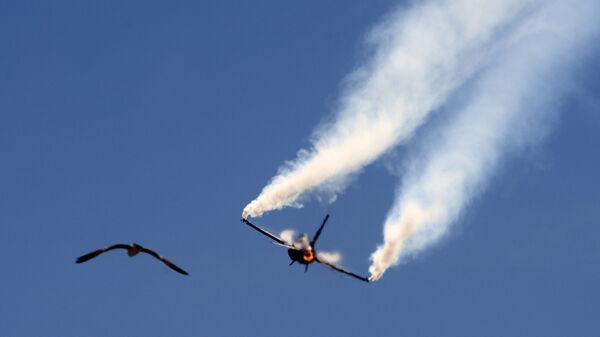 Pakistan's alleged “misuse" of the F-16 has attracted global attention over the past week, leading to the scrutiny of US arms shipments to Pakistan over the past decade under the pretext of helping Islamabad in its fight against terror groups.

New Delhi (Sputnik) — New York Times journalist Maria Abi-Habib on Wednesday, quoting American sources, revealed that contrary to India's insistence, Washington considers Pakistan not to have violated its F-16 purchase agreement when its jets got in an dogfight with Indian warplanes which led to the reported downing of an Indian MiG-21.

"US officials are pushing back hard on India's interpretation of their F-16 sale agreement with Pakistan. Sources say if India had entered Pakistan airspace for a second day, and Pakistan used the jet defensively, the contract wasn't violated. But, if Pakistan used an F-16 to attack India first, the deal was violated," Maria Abi-Habib, a New York Times journalist tweeted.

Citing weapons experts and officials, NYT journalist Abi-Habib also questioned the Indian Air Force's (IAF) claim that an AIM-120 missile's remnant, that was displayed by New Delhi, was 'proof' of Pakistan's use of an F-16 in the counter-strike that followed the Balakot bombing.

On Tuesday, the US State Department had acknowledged that it was following the report on the alleged misuse of the F-16 in air clashes between the two nuclear-armed South Asian neighbours very closely.

"We've seen those reports and we're following that issue very closely. I can't confirm anything, but as a matter of policy, we don't publicly comment on the contents of bilateral agreements that we have in this regard involving US defence technologies nor the communications that we have with other countries about that," Robert Palladino, deputy spokesperson of the US Department of State said during a media briefing.

Allegedly Downed PAF F-16 Pilot Mistaken as Indian, Lynched in Pakistan – Report
Meanwhile, former vice chief of the Pakistan Air Force (PAF) Shahid Latif told a local newspaper that there is no condition attached to the country's purchase of F-16 fighters from the US that stipulates they cannot be used against India.

"Pakistan can use the F-16 jets for its defence against any country, including India," former air marshal Shahid Latif said in reply to a query on whether the deal condition barred the use of the F-16 in 'offensive' operations. The News International said Latif wondered, "If Pakistan was bound not to use these F-16s against India, then why would the country have purchased it?" He said, "We did not need a toy".

Even as Pakistan continued to insist that the fighter jets used in the aerial clash with India were not F-16s, the Indian Air Force on Tuesday revealed a detailed account about the dogfight seeking to establish that it was a F-16 which the Pakistan Air Force (PAF) tasked with targeting an Indian military installation.

"During combat, use of F-16 by PAF and multiple launches of AMRAAM were conclusively observed. Prompt and correct tactical action by Su-30 aircraft, in response to AMRAAM launch, defeated the missile. Parts of the missile fell in area East of Rajouri in J&K, injuring a civilian on the ground," a statement by the Indian Air Force read.

India's Ministry of External Affairs has claimed that one PAF F-16 fighter aircraft was shot down by an IAF MiG 21 Bison.