Maduro: 'We Are Faced With the Strongest Imperialism of the Last 200 Years' 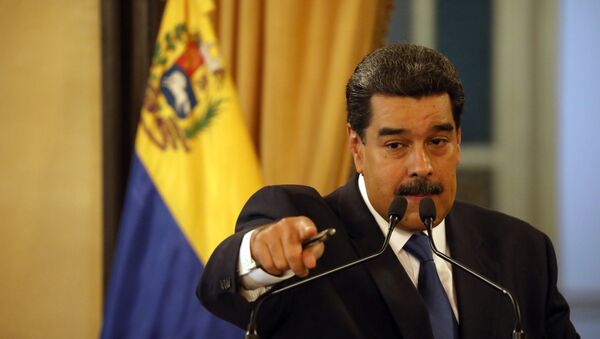 © REUTERS / Andres Martinez Casares
Subscribe
International
India
Africa
BUENOS AIRES (Sputnik) - No one and nothing can break the peace in Venezuela — neither external nor internal aggression, the country's President Nicolas Maduro said on Tuesday, speaking at events commemorating his predecessor Hugo Chavez.

"As I told the military, awarding them for the victory on February 23, when they defended our borders, our fate — no one and nothing can break peace in the Republic," Maduro said.

Former Adviser to Venezuelan President Chavez: 'There's No Way to Save Maduro'
Six years after the death of Hugo Chavez, the country is in a struggle, he said.

"We are faced with the strongest imperialism of the last 200 years, with economic, political and diplomatic aggression, with internal aggression, with sabotage, with attempts to disrupt the life of the country," the president said.

Bolton Assumes Strategy on Maduro-Guaido Spat Leading to Regime Change – Scholar
On January 5, Venezuelan opposition leader Juan Guaido was elected the head of the opposition-controlled National Assembly, which all other government branches have been refusing to recognize since 2016. On January 23, two days after the Venezuelan Supreme Court annulled his election, Guaido declared himself the country's "interim president." Maduro qualified Guaido's move as an attempt to stage a coup orchestrated by Washington.

The United States immediately recognized Guaido, after which some 50 other countries followed suit. Russia, China, Cuba, Bolivia and a number of other states have, in the meantime, voiced their support for Maduro. Mexico and Uruguay have refused to recognize Guaido, declaring themselves neutral and promoting crisis settlement via dialogue.