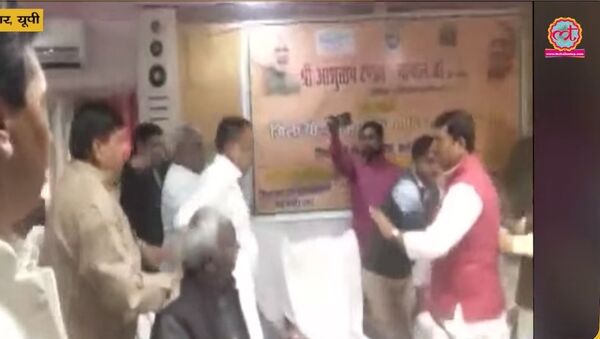 An Indian lawmaker is being shamed on social media after a video of him thrashing junior party leader Rakesh Singh Baghel with his shoes went viral. Tripathi was reportedly enraged with Baghel for not inscribing his name on the foundation stone of a road project.

New Delhi (Sputnik) — Police had to step in after MP Sharad Tripathi thrashed Rakesh Singh Baghel, a member of the Uttar Pradesh Legislative Assembly, with his shoes after finding his name missing from the foundation stone during the inauguration of a recently constructed road at Sant Kabir Nagar.

According to the ANI news agency, while Tripathi wanted his name to be inscribed on the foundation stone, Baghel contended that he was the local leader and that it was his decision to leave out Tripathi's name.

In the video that has now gone viral, the duo are first seen engaging in a verbal duel after which Tripathi goes charging towards Baghel and starts hitting him with his shoes, much to the shock of everyone present at the ceremony.

It is worth mentioning here that Indian leaders are preparing for the polls due in the next two months, which will see the election of a new government. Over 80 billion voters will decide the fate of Prime Minister Narendra Modi and his Bharatiya Janta Party.

Netizens have reacted to the video by calling it a shameful act.