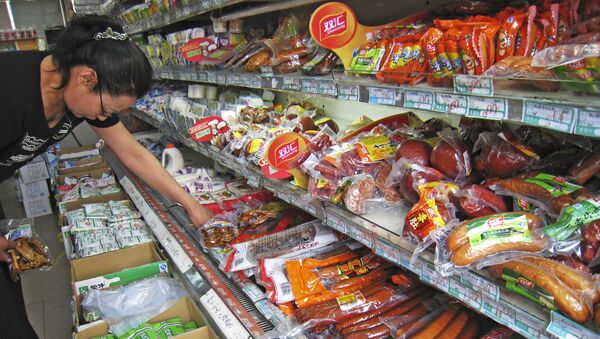 The US and China are on their way to achieving a trade deal that could remove most of Washington's tariffs provided that Beijing keeps to its pledges. This is what Bloomberg reported citing two sources familiar with the negotiations.

This comes as US President Donald Trump has asked Beijing to promptly remove all tariffs on US agricultural goods including pork.

Sputnik has discussed how the tariffs have affected US pork producers with Jim Monroe, a spokesman for the National Pork Producers Council, the industry's largest trade association.

US, China Unlikely to Resolve Key Differences on Trade Within 90 Days - Scholars

Sputnik: As a spokesman for the National Pork Producers Council how crucial is China for US pork producers?

Jim Monroe: I'll start by saying that all exports markets are crucial for US pork producers. One in four hogs raised the United States is being raised for the export market. We have good demand in the United States but most of our growth and most of our opportunity is addressing consumers or providing pork to consumers outside of our borders where 96% of the population exist.

China is particularly important. It's the largest pork-consuming nation in the world. In 2017, the last full year that we have export numbers for, we exported over a billion dollars worth of pork to China, and that's out of total exports of $6.5 billion. So you can see that it's a significant export market for us. And right now with the trade dispute that we've got in place right now, it is obviously hurting US pork producers to have really non-competitive access to the Chinese market. We're facing tariffs of well over 60% and that just doesn't allow us to compete with domestic producers or other exporting pork nations.

Sputnik: It's always interesting talking to experts that have got a good insight into particular markets when it comes to this US-China trade war in what way has this tariff war affected US pork producers, have you got any numbers you can share with us in terms of the drop in figures? Can you help us out with that?

Jim Monroe: Yes, Iowa State University, one of their leading economists who follows the pork sector in the United States closely has done an analysis on the ongoing trade dispute with China is costing US pork producers $8 per animal and if you annualise that that's about $1 billion a year and that's just due to the dispute with China. We also got a dispute going on right now with Mexico which is our largest export market and because of the metal tariffs the US has placed on Mexico they retaliated against US pork and we now face tariffs there of 20% and that trade dispute is costing US pork producers $12 per animal and that amounts to $1.5 billion on an annualised basis. So the situation with both of those critical export markets is having dire financial consequences on US pork producers.

Sputnik: Those figures are absolutely stark, thank you, for sharing those. Now China recently confirmed a new outbreak of African swine fever in Shaanxi province. How much does this factor increase demand for American pork products? Are you aware of this swine fever outbreak in the Shaanxi Province and is having a positive effect then?

Jim Monroe: We're absolutely aware of the African swine fever situation in China. It's been spreading really since about the fall of last year. Our primary concern is to keep African swine fever out of the United States with its spreading in China, in parts of Europe, and now Vietnam,  that's a significant concern. We are escalating border inspections and taking other precautions to keep African swine fever out of the US. It's hard to speculate on how that's going to impact exports to China. It is safe to assume though that China is going to be increasingly looking for reliable producers of pork. There is no more reliable producer of pork than the United States. We produce the safest, highest quality, and the most affordable pork in the world.

Beyond that, I cannot speculate how it's going to impact our exports, but certainly, China is going to be looking for reliable sources. And if it doesn't come from the US it will come from other markets and we will be able to backfill in those markets as well. But the primary focus is an animal disease is never a good thing and we want to contain its spread worldwide. It is not good for the industry worldwide to have that spreading.