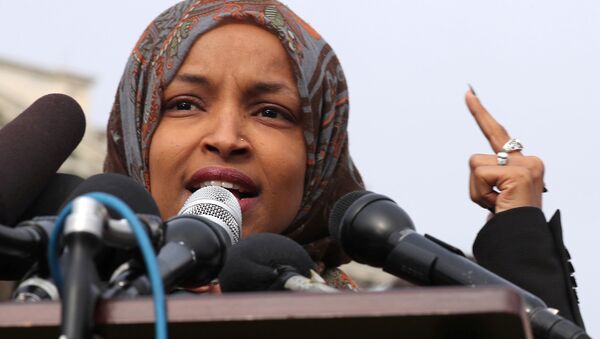 ​Ilhan Omar, one of the first two Muslim women elected to the US Congress in November 2018, has faced backlash from her own Democratic Party after criticizing the influence of the pro-Israel lobbying group AIPAC, the American Israel Public Affairs Committee, on American politics.

Ali Abunimah, co-founder of The Electronic Intifada and author of the book "The Battle for Justice in Palestine," joined Radio Sputnik's Loud & Clear Monday to discuss the recent smear campaign against the Minnesota congresswoman.

​"Things have changed in the Democratic Party, even in the last four, five years, in that it is practically a crime now to criticize Israel in any way," host John Kiriakou said.

"It is also unacceptable now, within the Democratic Party, to criticize AIPAC. So, where do Democrats who support an independent foreign policy, support for the Palestinian people, go, when the leaders of the Democratic Party jump all over you and call you anti-Semitic if you express any concern about the closeness of the US relationship with Israel?" he asked.

Last month, Omar was criticized by members of the Democratic establishment for referencing the influence of lobbying groups like AIPAC, who advocate for close ties between the US and Israel.

Omar commented on a tweet by American journalist Glenn Greenwald that read, "GOP Leader Kevin McCarthy threatens punishment for @IlhanMN and @RashidaTlaib over their criticisms of Israel. It's stunning how much time US political leaders spend defending a foreign nation even if it means attacking free speech rights of Americans," with the 1997 Puff Daddy & the Family song lyrics, "It's all about the Benjamins baby." When asked to clarify who is paying Congress members "to be pro-Israel," Omar responded, "AIPAC!"

​Following Omar's tweet, a joint statement was released by the Democratic leadership accusing Omar of using "anti-Semitic tropes" and saying "Anti-Semitism must be called out, confronted and condemned whenever it is encountered, without exception."

​"Let's start by noting that this round of attacks on Omar is the second round of completely outrageous and unjustified smears against her, claiming that she is anti-Semitic for raising perfectly legitimate and urgent issues related to the outside influence of the Israel lobby, particularly AIPAC," Abunimah told hosts Kiriakou and Brian Becker.

"And as a member of Congress, Omar, like the 534 other members, will be feeling directly the constant pressure from AIPAC, so she's raising legitimate issues. But who is she getting attacked by? The Democratic Party leadership. And I think we have to see the attacks on Omar in context. These sorts of attacks were not necessary previously, because no one dared speak up. We have to see this is a sign of change, a sign of weakness on the part of the Democratic leadership. But on the other hand, these terror tactics of terrorizing people into silence by demanding and smearing them are, nonetheless, effective to a certain extent," he added.

After facing backlash for her tweets, Omar publicly apologized on Twitter.

"Anti-Semitism is real and I am grateful for Jewish allies and colleagues who are educating me on the painful history of anti-Semitic tropes," Omar tweeted February 11. "My intention is never to offend my constituents or Jewish Americans as a whole. We have to always be willing to step back and think through criticism, just as I expect people to hear me when others attack me for my identity. This is why I unequivocally apologize."

"It's all about smears and creating an impression, and what makes it worse is the pressure is so great that people like Omar feel compelled to apologize even when there is nothing to apologize for, and that is what Omar has done under this intense avalanche of pressure. And then people say, ‘Oh she apologized, so she must have done something wrong,'" Abunimah told Sputnik.

"She didn't; the apology was extorted and pressured out of her. Another important point to make here is, don't [just] focus on the Democratic Party. This is actually a transatlantic campaign. If you look across the Atlantic, the same thing has been going on in the UK, targeting the Labour Party led by Jeremy Corbyn, and now in France as well, where [French] President [Emmanuel] Macron made a speech a couple of weeks ago declaring that anti-Zionism… is now anti-Semitism. And there are moves in France to outlaw anti-Zionist speech," Abunimah added.

"France has very draconian restrictions on speech," he noted, also adding that "people who opposed Zionism on principle are deliberately accused of being haters of Jews."

"That is obviously an outrageous conflation, because anti-Zionism is anti-racism, and anti-Semitism is racism."