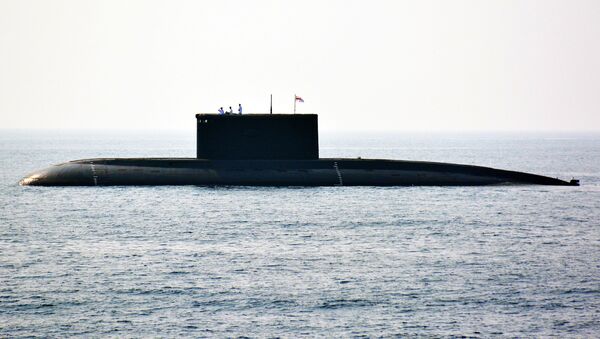 The Pakistan Navy has released a video claiming that an Indian submarine had tried to enter Pakistani waters on 3 March and was pushed back. The latest development comes after an increase in tensions between the two nuclear-armed nations.

New Delhi (Sputnik): The Pakistan Navy (PN) on Tuesday claimed it foiled an attempt by an Indian submarine to enter Pakistani waters.

"The Pakistan Navy used its specialised skills to ward off the submarine, successfully keeping it from entering Pakistani waters", a statement from a Pakistan Navy spokesperson reads.

According to the statement, the fact that an Indian submarine laden with advanced technology was detected by the Pakistan Navy is a loss for the Indian Navy. "The Indian submarine was not targeted keeping in view Pakistan's policy of peace", a spokesperson added and advised that India must learn from this incident and "move towards peace".

The Pakistan Navy also alleged that it had successfully repelled an Indian submarine from entering the country's territorial waters in 2016 as well. The unsuspecting submarine was detected and localised south of the Pakistani coast on 16 November 2016.

The navy has also released the purpoted footage of the submarine.

The footage of Indian Navy's submarine which was detected while trying to enter Pakistani waters and thwarted back by the Pakistan Navy. I wonder how many more failed attempts Modi will make before realizing that he is doomed — #PakistanZindabad #PakistanNavyZindabad pic.twitter.com/FNErtS6kbs

The Indian Navy issued a statement on Pak Navy claim of detecting Indian Submarine, accusing Islamabad of “indulging in false propaganda and spread of misinformation.”

Pakistan Unsuccessfully Attacked Indian Cyberspace After Pulwama Attack - Report
The recent tensions between India and Pakistan flared up last month when the Indian Air Force conducted an air strike on 26 February against a suspected terrorist camp in Balakot located inside Pakistan. The Indian government had claimed that the strike was a pre-emptive non-military strike and was in retaliation for a 14 February terrorist attack when a Jaish-e-Mohammad terrorist blew himself up in front of a security personnel convoy in Pulwama of the Indian state of Jammu and Kashmir killing over 40 soldiers.

The following day Islamabad announced it had shot down two Indian warplanes over the Kashmir border and captured Indian pilot Abhinandan Varthaman, who was released a few days later.