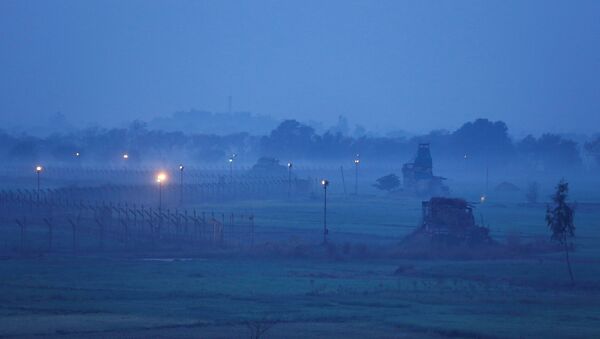 © REUTERS / Adnan Abidi
Subscribe
India says it has satellite images that establish the presence of at least six terrorist training hubs in Pakistan and that it will soon share the details with the international community. Interestingly, most of the terror infrastructure in Pakistan exists near military installations in the country, a government source told Sputnik.

New Delhi (Sputnik): India has said that it will soon share details of terrorist training camps in Pakistan with friendly countries, claiming that it has credible satellite imagery to back its allegations.

"Indian intelligence agencies have listed six terror hubs in Pakistan and the report collated by the authorities establishes that they serve as training grounds for militants by Pakistan", a source in the Home Ministry of India told Sputnik.

Pakistan Starts Seizing Assets of UN Designated Terror Outfits - Foreign Office
The six training centres where terrorists are allegedly being prepared to launch the attack against India have been identified in Boi, Laqa-e-Gair, Deolin, Khalid Bin Walid, Garhi, and Dopatta in Pakistan-administered Kashmir and mainland Pakistan.

Sputnik has come to know from official sources that the list of evidence and documents which India plans to share with friendly countries mostly includes two transcripts of messages of Jaish-e-Mohammad founder Maulana Masood Azhar on Kashmir Solidarity Day (5 February 2019) in which he is heard clearly calling for a war against India as well as the dossier India reportedly shared with Pakistan after the recent suicide bombing in Pulwama in India-administered Kashmir.

India also intends to share the dossier about the operational terror hubs in Pakistan on various international platforms to let the world know about Pakistan's alleged role in sponsoring terrorism, as the situation is a growing threat to everyone and not just India, the source told Sputnik.

Pakistan has been maintaining that its government does not support terrorist organisations. However, amid mounting pressure from the international community in the aftermath of the terror attack in India, Pakistan has ordered the seizure of properties and funds of all the organisations recognised as terror outfits by the United Nations (UN).

Pakistan-based terror outfit Jaish-e-Mohammed has claimed responsibility for the 14 February bombing, in which more than 40 Indian paramilitary personnel were killed, leading to an escalation involving aerial attacks and intermittent cross border shelling.