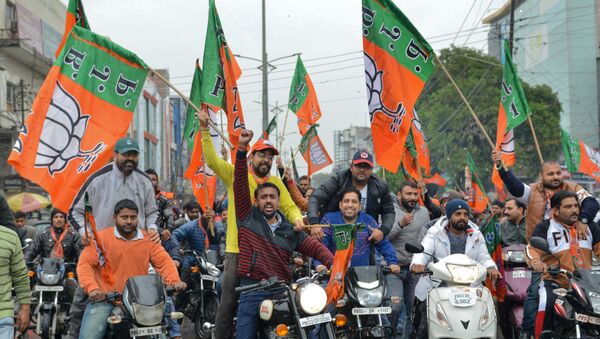 © AFP 2021 / NARINDER NANU
Subscribe
The hackers defaced the site with abusive comments and memes. There are news reports of some 900 websites allegedly being hacked by pro-Pakistan elements in the wake of strained India, Pakistan relations over a 14 February terror attack at Pulwama in Kashmir.

New Delhi (Sputnik) — The official portal of India's ruling political party, the Bharatiya Janata Party (BJP), was defaced today by cyber-criminals with even abusive posts posted on it along with a meme of Indian Prime Minister Narendra Modi.

Screenshots of the hacked home page have been shared extensively on social media.

The portal after being hacked is down even as this report was being filed.

The BJP has yet to give an official statement on the issue.

The main opposition party Congress made the best of the opportunity with its social media team head Divya Spandana tweeting, "If you're not looking at the BJP website right now — you're missing out".

According to a news report, after unsuccessfully failing to hack critical Indian websites in the wake of the terror bombing in Pulwama, India, Pakistan-based hackers have resorted to stoking fake news, interfering in the flow of information to create "chaos and confusion" in the Indian cyberspace.