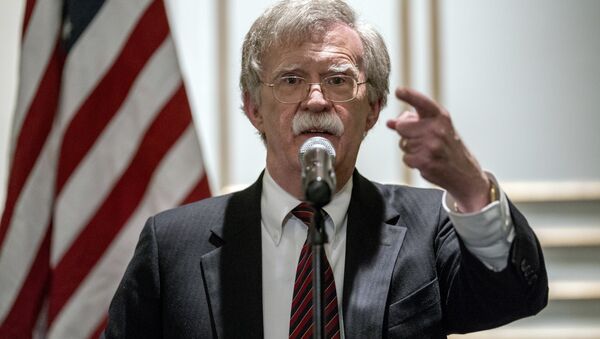 Delivering a speech in support of Venezuela’s self-proclaimed interim President Juan Guaido in Miami last month, US President Donald Trump pointed out that the days of socialism were “numbered” not only in Caracas, but in Nicaragua and Cuba as well.

White House National Security Adviser John Bolton took to Twitter to threaten Cuba's military and intelligence services with additional sanctions over their alleged role in the political crisis in Venezuela.

Cuba’s role in usurping democracy and fomenting repression in Venezuela is clear. That’s why the U.S. will continue to tighten financial restrictions on Cuba’s military and intel services. The region’s democracies should condemn the Cuba regime.

The tweet came shortly after Fox News cited a source familiar with POTUS’ national security team, as saying that the Trump administration is about to impose a new batch of sweeping sanctions against the Cuban authorities over their support for the government of embattled Venezuelan President Nicolas Maduro.

The move would reportedly be an application of the Helms-Burton Act – a 1996 law, which includes a provision that, if activated, would allow Cuban-Americans who hold US citizenship to sue foreign corporations and individuals over property seized by the Cuban government.

The so-called Title III provisions of the law have been waived by every president since its creation in 1996, but in January President Trump’s administration decided to suspend its terms for 45 days, rather than the customary six months that his predecessors have routinely invoked.

“This extension will permit us to conduct a careful review of the right to bring action under Title III in light of the national interests of the United States and efforts to expedite a transition to democracy in Cuba. We encourage any person doing business in Cuba to reconsider whether they are trafficking in confiscated property and abetting this dictatorship”, the State Department said in a statement at the time.

Guaido Vows to Return to Venezuela After Ecuador Visit - Reports
US Secretary of State Mike Pompeo has also accused Cuba of contributing to the escalation of the ongoing political crisis in Venezuela, which was dismissed by Cuban President Miguel Diaz-Canel as “slander” and “arrogance”.

President Trump, in turn, told the Venezuelan American community that Maduro was "controlled by the Cuban military and protected by a private army of Cuban soldiers". Rodriguez rejected POTUS' claims.

Cuba, along with Russia, Iran, Turkey and many other countries, refused to follow Washington’s suit and recognise Juan Guaido as Venezuela’s interim president.

Since the 1959 Cuban Revolution, the United States has been attempting to sabotage the communist government in Havana, having severed diplomatic ties with the island and introduced a trade embargo on it.

In 2014, Barack Obama’s administration announced a decision to normalise relations with Cuba, subsequently lifting some restrictions on bilateral exchanges. However, in June 2017, President Trump reversed the Obama-era policy and imposed new limitations on economy, trade and travel.

The United States has been increasingly involved in the political crisis in Venezuela, voicing outright support for Juan Guaido, the self-proclaimed interim president, challenging the legitimately elected Nicolas Maduro.

Argentinian and Chilean Citizens Show How Things Really Are in Venezuela
Caracas’ neighbour Colombia has also followed in Washington’s footsteps, with President Trump and his Colombian counterpart Ivan Duque holding a meeting on the situation last month.

On 3 March, Duque said that Maduro’s “days in power are about to end” because of mounting pressure on his “Mafioso” government and the allegedly increasing number of military defectors:

“Maduro is facing his last days, whether that’s one month or two, or one week, or one day”, he said, adding that “nobody has seen Maduro weaker”.

President Maduro previously accused the US of staging a coup d’etat in the country and said that a group of Venezuelan military defectors were conspiring in Colombia to sabotage the armed forces at his command.

READ MORE: US Claims on 'Maduro's Days Numbered' Mean Cuba, Nicaragua Will Be Next — Lavrov

In addition, he dismissed the Trump-Duque meeting as a “feast of hatred” toward Venezuela, and refused to allow the US humanitarian aid, stockpiled in Colombia, into the county, saying that it might be used as a pretext for foreign invasion.