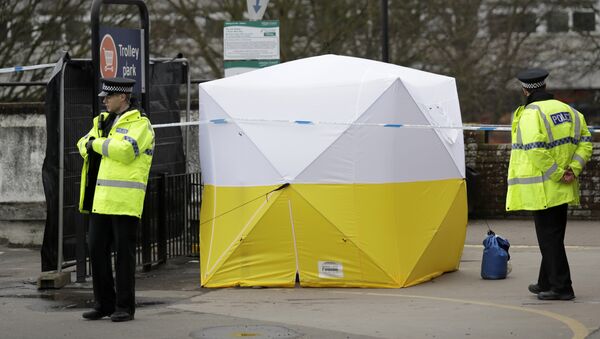 © AP Photo / Matt Dunham
Subscribe
As today marks a year since the world was shaken by reports of a nerve agent attack in the UK city of Salisbury, there has been no proof of Moscow’s alleged role in it, with the victims, the Skripals having disappeared after the incident not only to the public but to family too, while being at what London says is a "safe location".

MOSCOW (Sputnik) — The wide-ranging story began when Wiltshire Police announced that a man and a woman were found unconscious on a bench at a shopping centre in Salisbury on March 4, 2018, after having been exposed to an unknown substance, later identified by UK experts as the A234 nerve agent. The first media reports suggesting that the victims were former GRU officer Skripal and his daughter Yulia emerged just several hours later, with the first claims about a "Russian trace" being not far behind.

Within a week after the incident, UK Prime Minister Theresa May claimed that Moscow was "highly likely" culpable for the poisoning. Soon the whole case morphed into a London-led international anti-Moscow campaign, which resulted in Russian diplomats being expelled from the United Kingdom, the United States and a number of EU countries and soon produced a series of spy mania scandals.

A UK journalist has published a video from the plance where the incident occured last year.

Moscow has categorically dismissed accusations, pointing to their trumped-up nature and London’s rejection of any requests to cooperate in investigation and grant access to the poisoned Russian citizens. The Russian authorities have also repeatedly stated that the hype surrounding the incident, which they believe was orchestrated to incite anti-Moscow sentiment on the global stage, is actively used by London to divert public opinion from the looming Brexit and other related domestic issues.

GRU Officers Would Not Walk in Front of CCTV Cameras

Skripal's Niece Describes Year After Sergei's Poisoning as Full of Suffering
The rare occasion when the UK authorities shared some more or less specific information with regard to the investigation was September 5, when the UK Crown Prosecution Service said that it had sufficient evidence to indict two Russian nationals — Ruslan Boshirov and Alexander Petrov — with the attempted murder. The UK prime minister later claimed that the suspects — who were caught by CCTV cameras in a number of locations across London and Salisbury in the days before the poisoning and on 4 March itself — were employees of the Russian military intelligence.

In an interview with the RT broadcaster, Petrov and Boshirov, later confirmed that they did visit Salisbury in those days but emphasized that they knew nothing about the Skripals and actually worked in the fitness industry. According to the duo, they came to Salisbury on the advice of their friends just for sightseeing.

According to Nicholas Anderson, who worked for the UK Secret Intelligence Service for about two decades and wrote a number of stories about covert activities based on his life experience and participation in several operations in conflict zones, the reason behind London’s reticence about the results of the investigation is absence of any proof to show to the public a year after the attack. 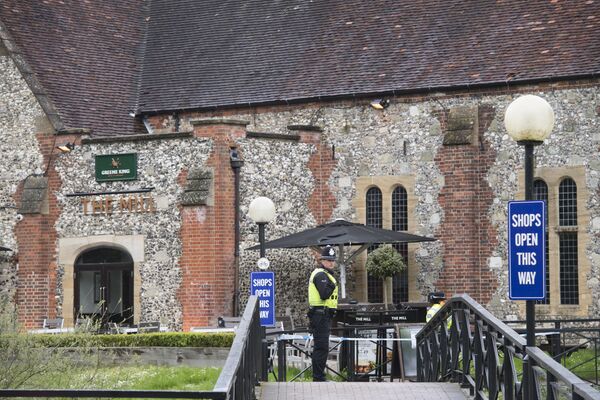 A police officer near the Mill pub in Salisbury, where the traces of the nerve agent used to poison former Main Intelligence Directorate colonel Sergei Skripal and his daughter Yulia were found
© Sputnik / Alex McNaughton
/
Go to the photo bank

"Probably because while there is evidence there is no actual proof. Experienced intel officers from any service worth its salt would not walk together while operational overseas, for one. Every foreign intelligence service knows Britain has the most CCTV in the world so if those fellows were from Russia's GRU then they messed up big time", Anderson told Sputnik.

Another odd fact that "goes against most people's thinking", retired MI6 agent Anderson recalled, is that the high-profile poisoning incident with the alleged use of a military-grade nerve agent took place just seven miles from the Porton Down lab, one of the UK government's main chemical research facilities.

Moreover, the Porton Down lab was involved in the investigation of both the Salisbury incident and the exposure to allegedly the same nerve agent in another neighbouring city of Amesbury in July, which left one UK woman dead.

The lab itself, however, later said that it could not prove that the nerve agent used in the Salisbury attack had been made in Russia or determine its country of origin.

Sergei Skripal's Mother Asks Police to Declare Her Son Missing - Niece
What Anderson described as a "remarkable" coincidence around Porton Down prompted Moscow soon after the poisoning incident to demand that London disclose its program on a synthesis of chemical warfare agents. According to the Russian Embassy in London, the fact that UK experts had swiftly identified the poison type — as an agent of the so-called Novichok group — and provided advice to the doctors who treated the victims indicates that the lab "has indeed researched and stockpiled such a chemical agent and the respective antidotes".

Moscow, on its part, has repeatedly stressed that Russia's chemical arsenal was destroyed long ago, which was confirmed by the Organisation for the Prohibition of Chemical Weapons (OPCW), while the Novichok-group of nerve agents was never produced in post-Soviet Russia. Meanwhile, Moscow has noted that work on such chemical compounds was carried out in a number of other states — the Czech Republic, Slovakia, Sweden and the United Kingdom itself.

Skripal Under Close Medical Supervision After His Health Worsens - Reports
As London has been reluctant to share any evidence related to the Salisbury incident, it was UK media that took charge of maintaining the hype around the story. UK-based blogger group Bellingcat — which has previously issued unfounded materials on multiple occasions — meanwhile took the lead in regularly publishing new "bombshells" related to the case, by either revealing the "true" identities of Petrov and Boshirov or claiming to have identified the third suspect in the poisoning case.

Anderson slammed the fact that London had "stupidly endorsed an amateur organization called Bellingcat" — which even presented a relevant report in the UK parliament at the invitation of a member of the latter's international committee — as if it "somehow knows more about what happened and who was behind it than the SIS [UK Secret Intelligence Service], the CIA [US Central Intelligence Agency] and NATO put-together."

"By using Bellingcat's findings our politicians embarrassingly threw egg on their own faces, in the eyes of the world. As a Dutch organization once said about them, 'From the perspective of forensics, the Bellingcat approach is not very robust. The core of what they are doing is based on so-called Error Level Analysis. ELA does not provide clear results. The conclusion is always based on the perspective of humans, on their interpretation, and it starts with the wholehearted believe 'it must be Russia'. I think this quote hits the nail on the head", he said. 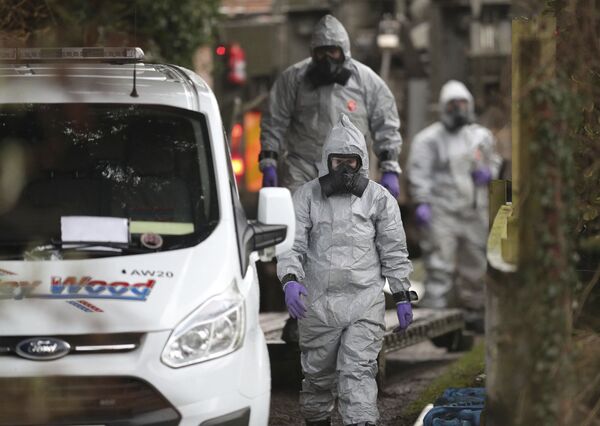 Investigators in protective clothing remove a van from an address in Winterslow, Wiltshire, as part of their investigation into the nerve-agent poisoning of ex-spy Sergei Skripal and his daughter, in England, Monday, March 12, 2018
© AP Photo / Andrew Matthews/PA

Dr. Colin Alexander, a senior lecturer in political communications at Nottingham Trent University, in turn, noted that the Western media "has done little" in terms of investigative journalism to try to find out the truth behind the Salisbury incident, which he believes is explained by close ties between the UK government and mainstream media.

"There has not been much said to the media following the Salisbury attack investigation. Moreover, the mainstream news media at least, has done little in the way of investigative work into this issue … However, the lack of attention also reveals much about levels of hegemonic collusion or subservience between the British state and British mainstream media outlets. For the most part, British media have little interest in upsetting the state as they rely on access to key individuals for most of their news sources," Dr Alexander told Sputnik.

According to the expert, the media, therefore, would hardly ever take the risk of publishing any leaks that could somehow question the government’s account of events without the relevant sanction from the authorities.

"Therefore, regardless of what the investigation actually concludes, if the British state desires quiet about its contents then the media are unlikely to do too much damage to that. This is particularly the case when it comes to so-called ‘national security’ issues", he stated.

When asked to suggest whether London could have seized the Salisbury incident as an opportunity to blame it on Russia in order to distract the public from the Brexit woes or other internal issues, Anderson did not rule it out.

"Most governments lie. It is, of course, likely the British government did this to distract the public away from Brexit. But it will never be proved though", he said.

Dr Alexander, in contrast, doubted that London could have entirely fabricated the story around Russia’s involvement.

"Not very likely. There are a number of conspiracy theories surrounding this case and this is one of them. Thus, while governments often put their garbage out the back door when the media are distracted by other issues it is unclear whether this is such an occasion. All countries see incidents of tax reform, social welfare cuts or even scandals being quietly acknowledged while other news is going on. This is one of the fundamental tactics of political propaganda … Nevertheless, Russia putting forward the two suspects for interview, and their highly unbelievable rationale for being in Salisbury at the time, has certainly not helped to distance Russia from this story", he noted.

Media Claims UK Police Investigating Total of 5 Russians in Salisbury Case
The anti-Russia campaign triggered by the Salisbury poisoning incident has indeed had far-reaching consequences and led to allegations of involvement of Russia’s GRU military intelligence agency in a cyberattack on the OPCW, the detention of a Russian upper house staff member in Oslo on charges of illegal data collection, a spying scandal involving a retired Austrian colonel and new anti-Moscow sanctions.

Making a link between the Salisbury events and the staged chemical attack in the Syrian city of Duma in April, the United Kingdom also successfully pushed through the initiative to expand the OPCW mandate to assigning responsibility for chemical weapons attacks — something that is denounced by Moscow as a politicized move and an encroachment on the UN Security Council authority.

EU Disregards Int'l Legal Instruments, Including on Chemical Weapons - Moscow
The Skripals themselves were discharged from hospital after long treatment, however, they have become invisible to both the public and family, with UK media reports being the only source for the latter to find out any news about their relatives. Most recently, in February, the 91-year-old mother of Sergei Skripal appealed to the police to declare her son missing, with his niece meanwhile voicing belief that her uncle had already died. London, meanwhile, said that the two were at a "safe location".