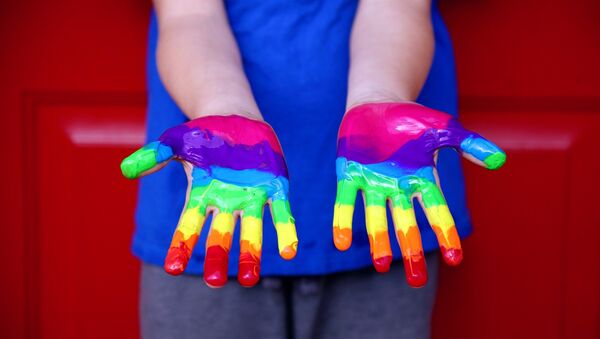 CC0 / /
Subscribe
A move by hundreds of parents in Birmingham, who objected to a curriculum featuring lessons about LGBT lifestyles, stirred vigorous discussion on social media.

Reactions poured in, following a mass protest by parents and their children at Parkfield Community School, where the 'No Outsiders' programme created to teach pupils about the Equality Act and British values.

A conflicting view, praising the effort to teach students about LGBT equality, has also surfaced online.

Some parents said that Parkfield Community School was brainwashing their kids about gay rights, others — from the Alum Community Rock Forum — complained that the educators were "undermining parental rights and aggressively promoting homosexuality."

After their efforts to remove the ‘No Outsiders' programme from the curriculum failed, the parents took their 600 primary pupils (about 80% of the entire enrolment) from the school.

One parent has reportedly said that his 6-year-old daughter was asking him and his wife questions they "did not know how to answer" and argued "she is too young" for lessons on gay rights.

"A family who live near me have already returned to Pakistan because of it," the parent said.

The teacher behind the scheme, assistant head Andrew Moffat, was awarded an MBE in 2017 for his outstanding services to equality and diversity in education. While the parents are unhappy about the LGBT lifestyle lessons, offered by Mr. Moffat, Parkfield Community School argued that it is "essential that pupils are prepared for life in modern Britain."

"The weekly protests are upsetting for all, disrupt the normal routines of the school and will have an overall effect on the educational achievement and well-being of your children. We therefore appeal to you to stop the weekly protests," the school's trustee board said in a letter sent to parents.

Birmingham is Britain's second-largest city, with a large Muslim population, considered to be one of the most diverse after London.

000000
Popular comments
There is a reason why the Health authorities, relevant government departments and even homo websites warn practicing homos to get vaccinations for STD's and wear condoms to protect themselves against the epidemic diseases of their lifestyle----That reason is "IT IS NOT NATURAL, NOT AN ACTIVITY THAT SHOULD BE PRACTICED!!! It is clear and evident that it is a filthy lifestyle. If it were any other practice that threatened a persons health and life they would be warned not to participate in it but not with the good old shirtlifters!
rplender1
20 March 2019, 01:29 GMT
000000
Newsfeed
0
New firstOld first
loader
LIVE
Заголовок открываемого материала
Access to the chat has been blocked for violating the rules . You will be able to participate again through:∞. If you do not agree with the blocking, please use the feedback form
The discussion is closed. You can participate in the discussion within 24 hours after the publication of the article.
To participate in the discussion
log in or register
loader
Chats
Заголовок открываемого материала
Worldwide
InternationalEnglishEnglishMundoEspañolSpanish
Europe
DeutschlandDeutschGermanFranceFrançaisFrenchΕλλάδαΕλληνικάGreekItaliaItalianoItalianČeská republikaČeštinaCzechPolskaPolskiPolishСрбиjаСрпскиSerbianLatvijaLatviešuLatvianLietuvaLietuviųLithuanianMoldovaMoldoveneascăMoldavianБеларусьБеларускiBelarusian
Transcaucasia
ԱրմենիաՀայերենArmenianАҧсныАҧсышәалаAbkhazХуссар ИрыстонИронауОssetianსაქართველოქართულიGeorgianAzərbaycanАzərbaycancaAzerbaijani
Middle East
Sputnik عربيArabicArabicTürkiyeTürkçeTurkishSputnik ایرانPersianPersianSputnik افغانستانDariDari
Central Asia
ҚазақстанҚазақ тіліKazakhКыргызстанКыргызчаKyrgyzOʻzbekistonЎзбекчаUzbekТоҷикистонТоҷикӣTajik
East & Southeast Asia
Việt NamTiếng ViệtVietnamese日本日本語Japanese中国中文Chinese
South America
BrasilPortuguêsPortuguese
NewsfeedBreaking
05:07 GMTMass Killer Breivik Sending Letters to Survivors With Excerpts From His Manifesto
04:47 GMTCOVID-19 Live Updates: Japan to Ban Travellers From Entering to Prevent Spread of Omicron Variant
03:46 GMTVideo: Jacksonville Jaguars Mascot Risks it All in Failed Stunt, Still Unable to Bring Luck to Team
03:39 GMTGOP Lawmaker Says Biden’s Social Spending Plan Would Allow IRS to 'Spy' on Americans
02:53 GMTMaduro Calls EU Observers at Latest Venezuelan Elections ‘Delegation of Spies’
02:43 GMT'Keep Livin': Matthew McConaughey Decides Not to Run for Texas Governor
02:36 GMTOver 2,000 People Protest Against COVID-19 Measures in Prague - Reports
02:19 GMT'French Trump' & Possible Presidential Candidate Zemmour Spotted Showing Middle Finger to Protester
01:28 GMTMarket Bull Expects US Fed to Raise Rates Six Times By 2024 Due to High Inflation
00:24 GMTRepublican Rep. Says Congress Leadership 'Needs to Change' as GOP Could Secure Southern Border
YesterdayFauci Tells Biden It Will Take 2 Weeks to Have Full Information on Omicron Strain
Yesterday‘Absolute Hubris’: Rand Paul Slams Fauci For Saying 'I Represent Science'
YesterdayRoger Stone Calls FBI 'Biden's Personal Gestapo' While Speaking of Jan. 6 Committee Subpoena
YesterdayJennifer Lopez Feels Her Reunion With Ben Affleck Is 'Truly Meant To Be,' Report Says
YesterdayUS Transport Sec Buttigieg Wriggles on Ridiculed 'Racist Roads' Comments
YesterdayNew Jersey School to Remove President Woodrow Wilson's Name Over Racism Legacy
YesterdayTrump's Super PAC to Hold Biggest Fundraiser Yet Amid Biden's Sinking Polls - Report
YesterdayFrance Blames UK for Channel Drownings for Being 'Too Attractive' to Migrants
YesterdayWHO: Data Insufficient to Conclude Omicron More Dangerous Than Delta
YesterdayUS Reportedly Sends Two Military Convoys to Syria Consisting of Over 100 Vehicles