Farage Rips May's Deal as 'Surrender', Says PM 'Not Made of Same Stuff' as Trump 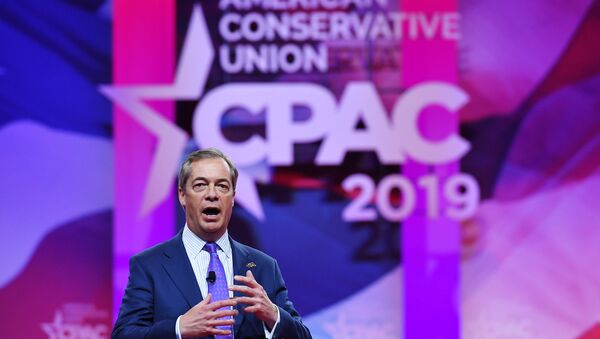 Addressing a Conservative Political Action Conference (CPAC) in Maryland, US, on Saturday, ex-UKIP leader Nigel Farage said that the British people’s problem was that Prime Minister Theresa May was “not made of the same stuff” as US President Donald Trump.

“The people have not changed their mind. I shouldn’t have to do any work for the next four weeks. But we have a little bit of a problem. Our leader is not made of the same stuff that your [America’s] leader is made of. Our leader has negotiated a Withdrawal Agreement that reads like a surrender document of a nation that’s been beaten at war, and literally has a gun to its head. Our Withdrawal Agreement means we would leave the EU in name only”, Farage said.

Farage stressed that under the agreement it may take “many years and possibly never” before London could strike a bilateral deal with Washington.

“There is very real risk that because of the sheer awfulness of our Withdrawal Agreement, that we may find that our political class actually choose willfully to delay our departure date”, he said.

The British politician went on to say that he was “getting back fit” in case his colleagues “betrayed the result” of the 2016 referendum:

According to him, Brexit proponents and Trump supporters faced similar issues, such as the fact that the establishment and “the big businesses behind it” refused to accept the results.

Farage is expected to lead a pro-Brexit march that kicks off on 16 March in Sunderland and aims to reach London on 29 March – exactly in time for the divorce deadline. Farage, who has recently registered the Brexit Party, has been vocally opposing any form of the withdrawal’s delay.

We're marching from Sunderland to London to tell the Westminster elite we will not be betrayed over Brexit. Get your walking boots on! pic.twitter.com/td1RFpbtwQ

After Theresa May announced that she would offer MPs the chance to vote for either a no-deal Brexit or a delay in the UK leaving the EU, media reports emerged, suggesting that the bloc is expecting London to ask to extend the deadline by three months.

Even though the prime minister managed to negotiate a withdrawal deal with Brussels after months of intense talks, the agreement has faced much backlash within the UK and calls for a second Brexit vote.

The UK Parliament has also refused to endorse the deal so far due to a controversial provision on the so-called Irish backstop plan that would keep Northern Ireland in the EU Customs Union if London and Brussels fail to reach an all-encompassing deal.

In a bombshell-laden speech, Farage dismissed the smear campaign against President Trump as “disgusting” and made a reference to POTUS’ ex-lawyer Michael Cohen, who testified before Congress on his work for Trump last week, calling him a “convicted liar” and a “scumbag”.

“They don’t accept the legitimacy of the Brexit referendum. The campaign against your president, I think at times, is pretty disgusting. There can never have been a president who has been subject to more abuse and vitriol than Donald Trump. But I though this week it sunk to the depths because we saw a convicted liar – some would even say scumbag. Yes, let’s say scumbag, shall we – I mean, what on Earth was Michael Cohen being given that platform for if it wasn’t, yet again, for the denigration of your president? We are living under constant assault”, he said, receiving a rapturous welcome.

Trump’s former attorney testified before a House Committee for eight hours, and will be back to testify in Congress on 6 March in connection with alleged illegal activity during the Trump campaign and his presidency.

Following the testimony, Trump took to Twitter to accuse his ex-employee of committing perjury “on a scale not seen before”.

Michael Cohen’s book manuscript shows that he committed perjury on a scale not seen before. He must have forgotten about his book when he testified. What does Hillary Clinton’s lawyer, Lanny Davis, say about this one. Is he being paid by Crooked Hillary. Using her lawyer?

Virtually everything failed lawyer Michael Cohen said in his sworn testimony last week is totally contradicted in his just released manuscript for a book about me. It’s a total new love letter to “Trump” and the pols must now use it rather than his lies for sentence reduction!

Cohen remains out of prison to continue cooperating with Special Counsel Robert Mueller's probe into alleged collusion between the Trump team and Russia during the 2016 US presidential election, which has been denied both by both parties on numerous occasions.