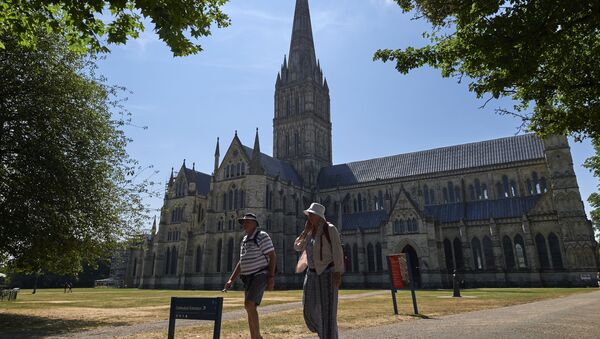 The premier has paid an official visit to Salisbury on the anniversary of that fateful day - although it's questionable whether she'll be able to shed any further light on the ever-mystifying incident.

UK Prime Minister Theresa May's office sought to mark the anniversary of the poisoning of Russian double agent Sergei Skripal on Twitter with a moving tribute, stating Salisbury "has fought back so well from such a devastating and reckless incident — a testament to the resolve, forbearance and positivity of the community".

There was just one problem — the accompanying photo was not of Salisbury and its renowned cathedral, but Bath and its perhaps slightly less well known abbey. The tweet was later removed, the same message and an accurate photo posted in its place — a spokesperson blamed the blunder on "human error".

PM pays tribute to Salisbury as a “beautiful, welcoming English city” in @10downingstreet tweet using a photo of… BATH pic.twitter.com/ipF1NW1Cio

​The Skripals were found slumped on a park bench in the English city of Salisbury on 4 March 4 last year. While British authorities have charged two Russians in absentia with the attempted murder, questions abound to this day as the true culprits and motivation for the poisoning, and Russia has denied involvement.

This is completely different. Bath Abbey's spire is 49m high. Whereas, as we all know, Salisbury Cathedral has a spire which rises to 123m. https://t.co/fPn2V9YmMu

​The event sparked the biggest diplomatic expulsions since the height of the Cold War.

​"PA: Downing Street has blamed 'human error' for a social media post about Theresa May's visit to Salisbury being illustrated by a picture of Bath." To be fair they could use that excuse for a lot

​May's geographical gaffe has been widely mocked on social media.

Showing a caring side & as a bold statement of her competency @theresa_may posts a tribute to Salisbury today featuring a photograph of Bath.
Tweet has been removed;
Unfortunately the PM hasn’t.

The beautiful spire of Salisbury or Bath or wherever. Oh they all look the same. Good to know the PM is as strong and stable on geography as she is on running the country. pic.twitter.com/y7wtzmy34y

@Theresa_May: Great to see all the work done in Salisbury post Novichok.

Skyline has completely changed and a new spire based on one in Bath added. Remarkable. pic.twitter.com/FSPYCrgzaM