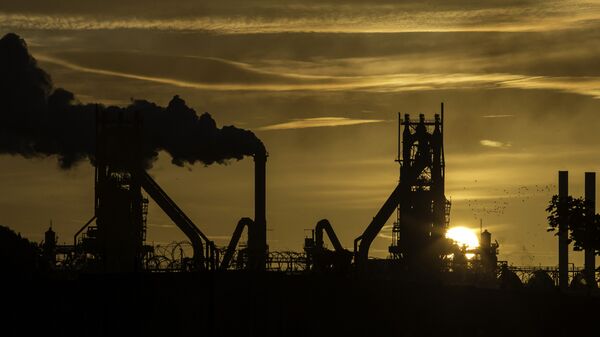 © AFP 2023 / Lindsey Parnaby
Subscribe
International
India
Africa
Some have slammed the deal as an attempt to win over Labour MPs in constituencies that voted to leave the European Union to back Mrs. May's Brexit plan.

The government's "Stronger Towns Fund" has come under fire after being accused of "bribing" MPs from financially deprived councils, according to government ministers.

£1.6bn in government money was used to benefit towns struggling with economic growth and aimed to create jobs and boost investments, as well as train locals in vocational skills, a press release on Monday said.

Over half the £1.6bn will go to towns in northern England and local councils will bid for the remaining £600m. Cities in the northwest will receive £281m, the West Midlands will pocket £212m and Yorkshire and the Humber will receive £197m. Communities will have a say in how the money will be spent, according to the UK government.

Farage to Lead Brexit March Across England to Counter 'Westminster Traitors'
The Prime Minister said: "For too long in our country prosperity has been unfairly spread. Our economy has worked well for some places but we want it to work for all communities.

"Communities across the country voted for Brexit as an expression of their desire to see change — that must be a change for the better, with more opportunity and greater control.

"These towns have a glorious heritage, huge potential and, with the right help, a bright future ahead of them."

Communities Secretary James Brokenshire said that the government had been listening to people concerned by "momentous changes to their communities" and was "determined" to provide support for them to facilitate a "more prosperous future" beyond Brexit.

"This major new fund builds on more than £9 billion in City and Growth Deals we have delivered since 2010 to help hard working people reach their full potential and to build an economy that works for everyone," Mr. Brokenshire said.

But critics noted that Mrs. May announced the move a week before MPs are set to vote on her Brexit deal, accusing the Prime Minister of paying off Labour MPs from Leave-supporting constituencies, with guarantees on workers' rights and environmental protections set for later this week.

Shadow secretary John McDonnell said in a press release: "This towns fund smacks of desperation from a government reduced to bribing MPs to vote for their damaging flagship Brexit legislation."

"The reason our towns are struggling is because of a decade of cuts, including to council funding and a failure to invest in businesses and our communities."

He added that Labour had pledged in 2017 to establish a "network of regional development banks" to finance small businesses, cooperatives and innovative projects needed.

"No Brexit bribery, stable investment where it's most needed," Mr. McDonnell said.

"Investment in skills and training is always welcome but we need to go behind this new fund and see it for what it is — a desperate measure to buy votes, and sadly this government has a strong record on that score.

She added that the DUP had been secured with a £1bn "bung-for-votes to prop up the government after it lost its majority," adding that Mrs. May was "so desperate to get votes for her bad withdrawal agreement she is relying on the same old trick".