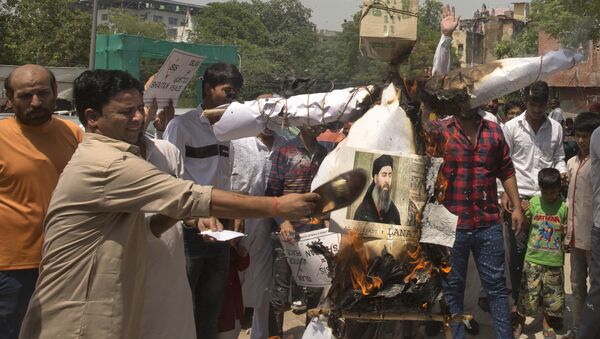 Iraqi lawmaker Hassan Salem earlier stated that the leader of Daesh* has been hiding in the deserts of Anbar Province in Iraq, and is being protected by the US military.

One of the Daesh* fighters captured by the Syrian Democratic Forces (SDF), Mohammed Ali,  has told The Sunday Times that the militants believe the caliphate leader, Abu Bakr al-Baghdadi, is not present in the sliver of land still held by the terrorist group, but is hiding somewhere in the desert. The Daesh* fighter added that the fact that their leader hasn't joined other militants for a last stand has been a source of great frustration to them.

According to the newspaper's source, the disappearance of the Daesh* leader has spurred internal fighting within the terrorist organisation.

"The conflict was between foreign fighters. They were asking, 'where is the caliph?'", the source said.

According to the newspaper, locals, as well as western officials in the region, believe al-Baghdadi is hiding in the Iraqi desert in Anbar Province. This report correlates to statements made by Iraqi lawmaker Hassan Salem, who said that Abu Bakr al-Baghdadi is hiding in the desert under the protection of the US military, who want to use him in case Baghdad adopts laws forcing American troops to leave the country.

Earlier, The Guardian reported, citing intelligence forces, that al-Baghdadi had barely survived an assassination attempt in a village near Hajin on 10 January organised by some of his closest foreign fighters. Following the incident, his bodyguards took him to the nearby desert.

Abu Bakr al-Baghdadi's death has been reported numerous times in recent years, but the terrorist leader has re-emerged each time. In June 2017, the Russian Defence Ministry said that Baghdadi could have been killed as a result of an airstrike by the Russian Aerospace Forces, but several months later an alleged audio recording of Baghdadi emerged, casting doubt on whether the terrorist leader is currently dead or alive.