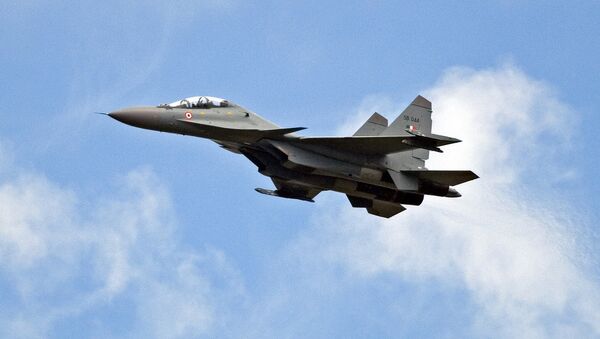 CC BY-SA 2.0 / Matt Morgan / Su-30MKI
Subscribe
International
India
Africa
On 26 February, India’s Air Force carried out an attack on an alleged Jaish-e Mohammad terrorist organisation base in Balakot, Pakistan-administered-Kashmir in retaliation for a suicide attack claimed by the group earlier in the month that killed some 45 Indian soldiers.

During the aerial strike on the alleged training base of the Pakistan-based terrorist group, Jaish-e Mohammad, in late February, the Indian Air Force deployed a “decoy package” of fighters, The Times of India reported, citing an unnamed source.

The fighters purportedly headed towards the organisation’s headquarters in Bahawalpur in the Punjab province in order to lure Pakistani combat air patrols away from the actual strike package deployed to attack the Balakot camp.

“The decoy package of Sukhoi-30MKIs, in turn, took off from our Punjab to fake a strike operation towards Bahawalpur. Pakistan was taken in by the decoy formation and vectored its fighters in the air towards it. Consequently, there was no Pakistani fighter anywhere near the actual strike package… the closest one would have been well over 150 km away. This also nails Pakistan’s claim that IAF fighters hastily dropped their bombs without achieving anything, much like its other factually incorrect statements like it did not use F-16s in the air intrusion on February 27”, the source said.

Asia
Indian Beauty Queens Laud Captive Pilot Abhinandan Vardhaman as Hero
In a parallel development, the Hindustan Times has reported that an audio message ostensibly issued by a senior leader of Jaish-e Mohammad appeared to confirm that Indian aircraft had reached their target in Balakot, and inflicted significant damage.

The audio was reportedly tweeted by a France-based Pakistani journalist, and its authenticity was allegedly verified by Indian security officials. If true, this information contradicts Islamabad’s official version that the Indians hit only a patch of trees.

A voice resembling that of Maulana Ammar, who has been identified as the brother of Jaish-e Mohammad founder Masood Azhar, can reportedly be heard in the recording:

“The enemy announced a war by crossing its borders to enter an Islamic country and launching bombs on Muslim schools. So, raise your weapons and show them if jihad is still an obligation or a duty”, the man is reportedly heard saying.

The message is believed to have been recorded two days after the Balakot air raid and played out as a call for action to militants at the Madrassah Sanan bin Salma in Peshawar, the Hindustan Times reported.

“Let me remind you that the Indian aircraft did not bomb the safe house of any agency, they didn’t attack any headquarters, they didn’t attack the meeting point of agencies, they attacked the schools where students were being trained to understand jihad better and vowed to help ‘oppressed’ Kashmiris. By entering our territories and attacking our schools, India has ensured the beginning of jihad against them”, he reportedly said.

The Hindustan Times cited a senior Indian security agency official as saying that the address was a “clear confirmation of the effectiveness of the airstrikes”.

“The tone and tenor of the message also indicate that the strikes have hit the group hard forcing a senior functionary to issue a message to their cadre”, the official said, speaking on condition of anonymity.

The developments come amid heightened tensions between the two nuclear-armed neighbours, triggered by a suicide attack claimed by Jaish-e Mohammad on 14 February that killed more than 40 Indian soldiers.

Although Pakistan denied the allegations of its involvement in the suicide attack, India's Air Force carried out an assault on the alleged Jaish-e Mohammad base in Pakistan-administered-Kashmir, destroying several facilities on 26 February.

The following day, Islamabad announced it had intercepted two Indian warplanes over the disputed Kashmir border, and captured Abhinandan. The Indian Air Force, in turn, stated that one of its MiG-21 Bison jets had shot down a Pakistani F-16 during the dogfight, while Islamabad maintained it never deployed an F-16, or sustained any losses.