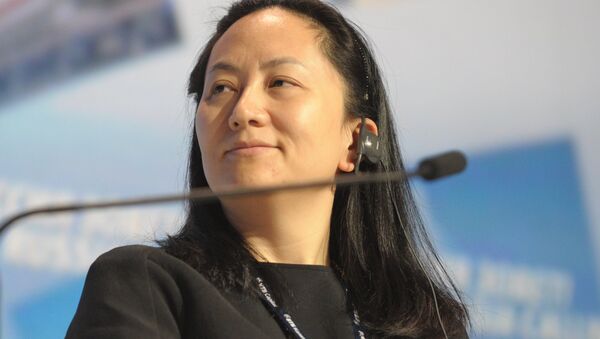 © Sputnik / Alexei Druzhinin
/
Go to the mediabank
Subscribe
International
India
Africa
Detained Huawei executive Meng Wanzhou now claims that Canada subjected her to detention, interrogation and search without telling her she was under arrest.

Wanzhou, CFO of Chinese tech company Huawei, arrested in Canada, has filed a lawsuit against Canadian officials, claiming her constitutional rights were violated during the arrest.

The lawsuit, filed in Canada's Supreme Court against federal government branches the Canadian Border Services Agency and the Royal Crown Mounted Police, asserts that "under the guise of a routine border check, unlawfully subjected [Meng] to detention, search and interrogation to extract evidence from her before she was arrested and provided with her rights under the Charter."

The lawsuit seeks damages for "misfeasance in public office and false imprisonment based on alleged multiple failures of those Canadian government officials to comply with the rule of law," the statement said," a statement by her lawyers, Gudmundseth Mickelson LLP.

World
US Attack on Huawei Aims for ‘Unfair Competition Conditions,’ Not ‘Security’
US prosecutors have accused Meng and Huawei of fraud aimed to circumvent US sanctions on Iran, and issued a warrant for Meng's arrest in August 2018. She was subsequently arrested in December 2018 while changing planes in Vancouver, causing a diplomatic rift between Canada and China.

China accused Canada of collaborating with the US to harass Meng, who is the chief executive officer of China's biggest private company.

Meng was later released on bail but forced to remain in Vancouver awaiting extradition to the US. On Friday, the Canadian government made the decision to go ahead with the extradition process.

"Today, Department of Justice Canada officials issued an Authority to Proceed, formally commencing an extradition process in the case of Ms. Meng Wanzhou," the government said in a statement, according to the Inquirer report.

China has protested the decision, calling it an "abuse of the bilateral extradition treaty" between Canada and the US.

"This is a severe political incident. We once again urge the US side to immediately withdraw the arrest warrant and extradition request for Meng Wanzhou and urge the Canadian side to immediately release her and ensure that she returns to China safe and sound," Chinese ministry spokesman Lu Kang said on Saturday, cited by The Times of India.