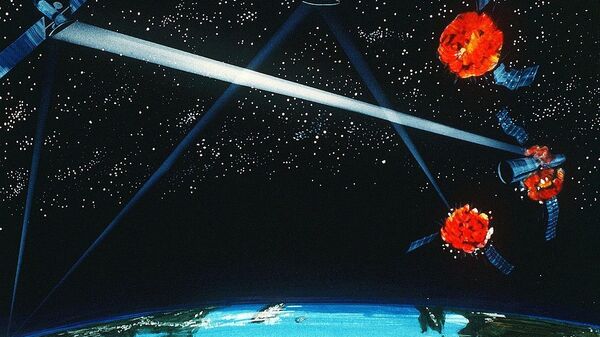 Chief of the Russian General Staff and First Deputy Defence Minister, General Valery Gerasimov has stated that modern conflicts are characterised by attracting means of economic, political, diplomatic, informational pressure, as well as a demonstration of military power in the interests of enhancing the effectiveness of non-military measures.

"Therefore, the search for rational strategies for waging war with a different adversary is of paramount importance for the development of the theory and practice of military strategy. We need to clarify the essence and content of military strategy, the principles of prevention, preparation for war and its conduct", the Chief of the General Staff noted.

US Must Accelerate Deployment of Space Sensors to Counter Russian Threat - NORAD
He stressed that under these conditions, the Russian Armed Forces must be ready to conduct wars and armed conflicts of a new type using "classical" and "asymmetric" methods.

It is necessary to further develop the forms and methods of using the armed forces, primarily in the sphere of strategic deterrence, as well as to improve the state defence structure, he noted.

Gerasimov went on to say that the programme for staffing the Russian Armed Forces with contract servicemen is proceeding as planned.

"By the end of 2025, their number will reach 475,000 troops, and the need for conscription of citizens will be reduced", he said in a speech at a general meeting of the Academy of Military Science.

READ MORE: NASA to Work With Russia on Concerns Over Planned Crew Dragon Flight to ISS

Today, the officer corps of the armed forces is staffed with trained professional personnel, he said.

"All the commanders of military districts, integrated combined arms forces, air force and air defence units, as well as 96 percent of the commanders of combined-arms units and formations, have combat experience", Gerasimov recalled.

The nuclear triad, which plays a key role in maintaining strategic parity, has noticeably strengthened, he noted.

"The share of modern weapons in our nuclear component has reached 82 percent”, Gerasimov said.

Prof on US Space Force Creation: It May Have Grave Consequences for Humankind
The complexity of modern weapons makes it almost impossible to organise their production in a short time in the event of a war, therefore everything should be produced and commissioned in the required quantity in peacetime, the Chief of the General Staff said.

"We must, by all means, ensure technical, technological, and organisational superiority over any potential adversary”, he said.

This requirement should be key in setting targets for the defence industry to develop new types of weapons, allowing enterprises to conduct long-term planning, Gerasimov said.

Gerasimov continued by saying that the US and its allies have set an aggressive vector in their foreign policy, and are working on offensive military actions.

The US and its allies aim to eliminate statehood in countries they dislike, which is evidenced by developments in Venezuela, he noted.

"The United States and its allies have determined the aggressive vector of their foreign policy. They are working on offensive military actions, such as global strike, a multi-sphere battle, they are using the colour revolution technology and soft power. They aim to eliminate the statehood of countries they dislike, undermine sovereignty, change the legally elected bodies of state power", Gerasimov has stated.

He cited Iraq, Libya, and Ukraine as examples of such a strategy.

"At present, similar actions are being observed in Venezuela", the Chief of the General Staff noted.

Science & Tech
Wild-Eyed Weapons: Pentagon Working on Self-Propelled Autonomous Satellites
It is necessary to further develop the forms and methods of how the armed forces will be used, primarily in the sphere of strategic deterrence, as well as improving the state defence structure, he added.

He further elaborated that the Pentagon has begun developing a new warfare strategy focused on actively using the protest potential of a fifth column to destabilise the situation in the targeted countries while simultaneously striking the most important strategic facilities with high-precision weapons.

"The Pentagon has begun to develop a fundamentally new strategy of warfare, which has already been dubbed the Trojan Horse. Its essence lies in the active use of the protest potential of the 'fifth column' for the destabilisation of a situation while simultaneously attacking the most important facilities with high-precision weapons", Gerasimov told reporters.

Russia is ready to deal with any of the new strategies, he stressed.

"In recent years, [Russian] military scientists, together with the General Staff, have developed conceptual approaches to neutralise the aggressive actions of potential opponents", the Chief of the General Staff noted.

Russia
Putin: Russia to Take Steps if US Deploys Its Short, Medium Range Missiles in EU
He stressed that the basis of Russia's response is an active defence strategy, which, given the defensive nature of Russia's military doctrine, provides for a set of pre-emptive measures to neutralise threats to the security of the state.

"The justification of the measures that are being developed should constitute the scientific activity of military scientists. This is one of the priority areas for ensuring state security. We must be ahead of the enemy in the development of military strategy, one step ahead", the Chief of the General Staff added.

The statement comes after the Venezuelan opposition on 23 February attempted to force US-sponsored aid into Venezuela through its borders with Colombia and Brazil, both of which support the opposition that sparked clashes between Venezuelan officers and pro-aid protesters. President Nicholas Maduro condemned the unauthorised aid delivery as part of Washington's attempts to intervene in Venezuela and remove him from power, saying the opposition and longtime US ally Colombia had gathered special gangs of bandits at the border.

READ MORE: Star Wars is Back? US Mulls Missile Defense Interceptors in Space

US Ready for Possible Space Wars - National Security Advisor
Earlier in February, US Secretary of State Mike Pompeo stated that the United States had suspended its obligations under the INF Treaty and triggered the six-month withdrawal process unless Russia comes back into compliance with the pact. The following day, Russian President Vladimir Putin announced that Moscow had also suspended its participation in the treaty in response to the US move.

The INF Treaty banned the US and Soviet Union (later Russia) from deploying ground-launched cruise and ballistic missiles with ranges between 500 and 5,500 kilometres (310 to 3,400 miles).