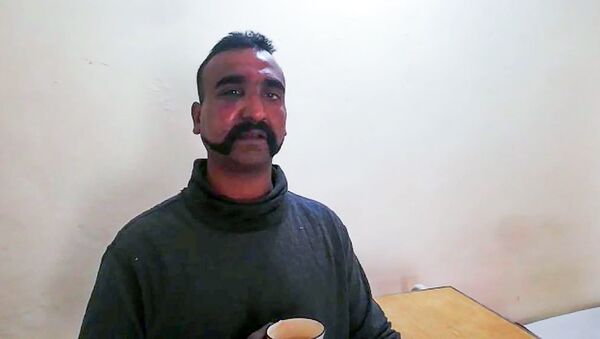 © AFP 2021 / HANDOUT / ISPR
Subscribe
The Times of India earlier reported that the pilot of a downed Indian jet had been recorded heaping praise on the Pakistani military’s professionalism under duress.

Anger erupted in India on Saturday after a video surfaced showing an Indian pilot of a downed airplane hailing the professionalism of the Pakistani military and slamming the Indian media for propelling “war hysteria”, as tensions between Islamabad and New Delhi took a new turn, AFP reported.

India’s PM Modi Calls For Nation’s Unity Amid Tensions With Pakistan
Media reports suggest that Air Force Commander Abhinandan Varthaman was forced to make the video before the Pakistani side agreed to release him from captivity. The footage has also been cited as a reason for the delay of his return to India.

Days after the video was unearthed, The Times of India cited the Indian Air Force as saying that the video of Abhinandan praising the Pakistani military for treating him well was heavily edited.

The footage featured many jump cuts that allegedly were made to tailor the captive’s statement to Pakistan’s agenda, the media claimed.

Gross to see a propoganda video which is heavily edited and has multiple cuts has been made by Pakistan agencies before releasing #WingCommandarAbhinandan and then released to Pakistan media. Clearly forced script and then edited further. Just undid the value of the gesture.

#DeclarePakTerroristState very stupid this to do in the end is to release a forced video of the pilot of 1:20 min with 40 cuts forced to speak lies.Spreading propaganda.

Come on #PakistanLeadsWithPeace, what do you wanted to show with this Forced Video. What he is saying was scripted, and is given by you fools.
He is a Brave Pilot of #IAF https://t.co/04KpS312NG

Omar Abdullah, a former chief minister of Jammu and Kashmir, took to Twitter to comment on the incident, and the video, which he also believes, was filmed under duress:

Sadly the image you paint for us is marred terribly by the video he’s forced to record just before you sent him back. That high moral ground you had bequeathed to yourselves slipped at the end. https://t.co/tYsI2IXCql

In the meantime, Pakistani media outlets have praised the government for liberating the pilot, with lawyer Shahzaib Khan penning in The Express Tribune that Pakistanis “have a reason to boast… the Prime Minister has done Pakistan proud by not engaging in chest thumping or war-mongering for political gain”.

Pakistani netizens blasted reports alleging that the footage could be scripted:

Hindus says that the captured pilot was forced to make video statement. They also call him hero.
Can a hero be forced to make statement? Hero prefers death to humiliation.

Your pilot HIMSELF requested to have a video msg recorded for the world just before we were going to hand him over. He knew, once in India he won’t be allowed to speak. No one forced him.

Abhinandan was captured after his MiG fighter jet was shot down on Wednesday while he was conducting a mission over the disputed region of Kashmir. He managed to eject himself from the plane safely, but landed in the Pakistani-controlled part of Jammu and Kashmir, where he was eventually captured.

Shortly after his landing, a video emerged allegedly showing Pakistani troops protecting him from a furious mob, purportedly demanding that the pilot be handed over to them.

Minutes before his release, Abhinandan was recorded saying: “The army personnel saved me from the mob. The Pakistani Army is very professional and I am impressed by it”. He also voiced “regret over the role of Indian media for creating war hysteria”.

A video of a statement made by Indian pilot Abhinandan Varthaman while in Pak custody pic.twitter.com/toMWnSk1Gu

Hours after Abhinandan was handed over to India, two Pakistani civilians and three Indians were killed in cross-border shelling along the Line of Control in Jammu and Kashmir’s Poonch district.

In response, India’s Air Force carried out an assault on an alleged terrorist base in Pakistan-administered-Kashmir, reportedly destroying a number of facilities on 26 February.

The following day, Islamabad announced it had intercepted two Indian warplanes over the disputed Kashmir border, and captured Abhinandan. The Indian Air Force, in turn, stated that one of its MiG-21 Bison jets had shot down a Pakistani F-16 during the dogfight, while Islamabad maintained it never deployed an F-16, neither did it sustain any losses.