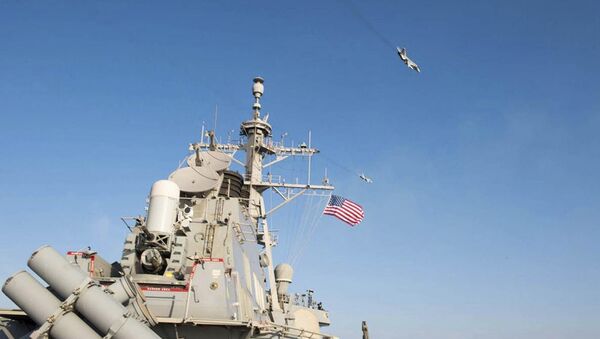 © REUTERS / US Navy
Subscribe
International
India
Africa
WASHINGTON (Sputnik) – The US guided-missile destroyer Donald Cook has departed the Black Sea for a continuing deployment in the Mediterranean and other areas covered by the Sixth Fleet, the Navy said in a press release on Friday.

"While in the Black Sea, the ship conducted operations at sea with the Turkish Navy and completed a port visit to Odessa, Ukraine in support of our NATO allies and regional partners", the release said. On Friday, the Donald Cook began a southbound transit through the Bosphorous Strait, which connects the Black Sea and the Mediterranean, the release added.

🇺🇸 #USSDonaldCook is headed out of the #BlackSea en route to the #MediterraneanSea after completing a successful deployment working with allies and partners in the region. https://t.co/TDwr5Krmtf pic.twitter.com/SpGIBcoQxW

Donald Cook has become the fourth US Navy vessel that visited Odessa since 2018, and the third US ship that has conducted operations in the Black Sea in 2019.

The Russian National Defense Control Center has said that Moscow had monitored the actions of the USS Donald Cook destroyer which entered the Black Sea on 19 February.

Back in November, three Ukrainian naval vessels illegally crossed the Russian maritime border as they sailed toward the Kerch Strait, the waterway between the Black Sea and the Sea of Azov. Russia seized the vessels and detained 24 people on board after they failed to respond to a demand to stop. After the incident, the Russian authorities opened a criminal case concerning the illegal border crossing.

Russian President Vladimir Putin said that the incident was a provocation plotted in advance as a pretext to introduce martial law in Ukraine. Putin noted the provocation could be linked to the Ukrainian president Poroshenko's low approval ratings ahead of the presidential election set to be held this spring.

Meanwhile, Russian Foreign Minister Sergey Lavrov has warned that Kiev is preparing a new provocation in the Kerch Strait involving the violation of Russia's territorial waters.