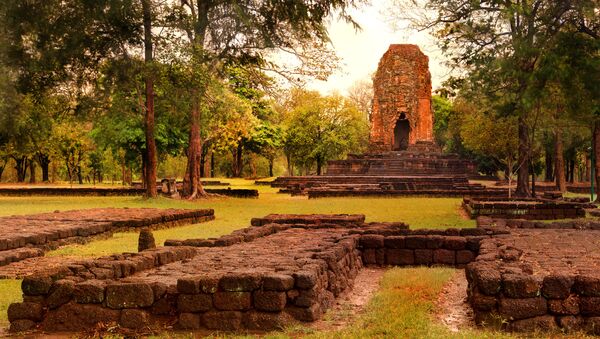 ECO Orient Resources (Thailand) and ECO Orient Energy on February 25 called for a public hearing process to develop an environmental impact assessment report on its plans to drill in the area. The plans include building a drilling rig just 100 meters away from the ninth-century Khlao Khlang stupa, one of the park's largest monuments, New Mandala reports. Stupas are tall rounded or conical structures associated with Buddhist practices or rituals — Khlao Khlang stupa is 64 by 64 meters wide at its base and stands 20 meters tall, according to New Mandala.

But this particular stupa won't be all that's threatened by the drilling. Thai archaeology experts note that though the drilling apparatus won't be inside the park, it will certainly be located in the midst of unexcavated historic mound sites and their priceless contents. Just a year ago, the Bangkok Post ran a story on excavation work being done around the stupa. "We are telling stories of the past that no one has known before," Decha Sudsawad, head of Si Thep Historical Park, told the Post of the work. The excavations have unearthed artifacts and human remains from as far back as the sixth century CE and before, and as work began in this area only in 2008, plenty remains to be discovered.

It is exactly that heritage that Thailand hoped to preserve and honor when it proposed the Si Thep park for UNESCO World Heritage status in January. Now, that listing is threatened.

"The new drilling hole is too close — just over 100 meters to the historical stupa — it will be harmful to our heritage and will lose us the chance to get the recognition as a World Heritage Site by Unesco," Wison Kosotanon, president of the Phetchabun Culture Council, explained for local English-language publication The Nation.

A post on Southeastasianarchaeology.com notes, "Any kind of drilling in that area is likely to hit archaeological remains, and more importantly, that's probably going to negatively affect any hopes of listing Si Thep as a World Heritage site."

Anan Choochote, director of the Culture Ministry's Fine Arts Department, has assigned teams to study the proposals, according to the same Nation report. "Our officers are studying its impact. If there is harm to our heritage, we will work with other governmental agencies to stop the project."

The publication noted that Calgary-based ECO has been drilling for oil in the area for more than a decade. It is also not the first time it's faced protest: in 2013 and 2014, villagers protested against drilling activity that they feared would pollute their homes and farms.

Given the Phetchabun Culture Council's opposition to the new drilling project, ECO Orient Resources may reconsider the project, the Nation report says. "As the result of the objection raised at the public hearing, senior officials at our head office will carefully study whether the firm should hold a second round of public hearings or drop it," said company spokesman Navin Panphan.

According to a 2016 report by the World Energy Council, Thailand was the second-largest net oil importer in Southeast Asia. Oil production had risen in recent years, but remained far below consumption levels. Most of Thailand's oil production comes from offshore fields in the Gulf of Thailand. It also has five properties currently inscribed on the UNESCO World Heritage list, though the country is dotted with ancient temples still in service or in ruins.

000000
Popular comments
A lot of world heritage sites have been destroyed, wich is a great saddnes for uss all. I hope the Thai can save this one.