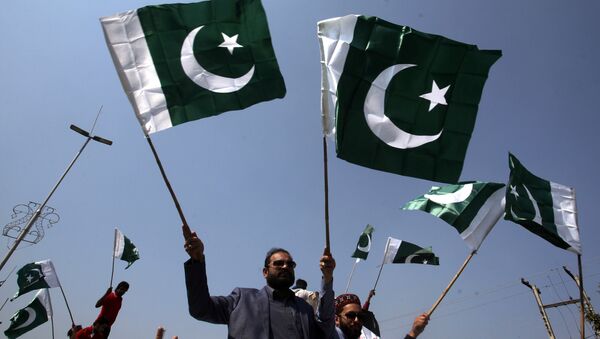 MOSCOW (Sputnik), Sofya Grebenkina - The launch of a dialogue between Pakistan and India depends on New Delhi since Islamabad is ready to sit at the negotiating table whenever its neighbor is willing, Pakistani Ambassador to Russia Qazi Khalillulah told Sputnik on Friday.

The ambassador pointed to the fact that Pakistani Prime Minister Imran Khan had made numerous attempts to contact his Indian counterpart, Narendra Modi, which had gone unheeded by the Indian party.

According to the ambassador, the release of Indian Air Force pilot Abhinandan Varthaman by Pakistan, who was taken into custody the day before, following an aerial skirmish over the disputed Himalayan region of Kashmir, shows the country’s commitment to peace and de-escalation.

"Pakistan has captured an Indian Air Force pilot, because we shot down their aircraft when they violated our airspace… He is being released and he is being handed over to the Indian authorities at our border. So that shows that we care for the people of India, we are a peace-loving country, we are trying to deescalate the situation," Khalillulah said.

Pakistan in Contact With Global Powers Over Standoff With India - Spokesperson
The Indian-Pakistani tensions escalated earlier this week, after Pakistani military shot down two Indian warplanes in the disputed region of Kashmir, responding to an earlier airstrike by Indian aircraft against what New Delhi said was a camp of Jaish-e-Mohammad group, considered terrorists by India and located on the Pakistani soil across the so-called Line of Control, separating India- and Pakistan- controlled areas of Kashmir.

The Indian airstrike came after a deadly attack by Jaish-e-Mohammad on the Indian paramilitary police force in Kashmir in mid-February. While India has accused Pakistan of supporting the militants and having a "direct hand" in the incident, Pakistan, in turn, has rejected the allegations, accusing India of being responsible for human rights violations taking place in Kashmir.