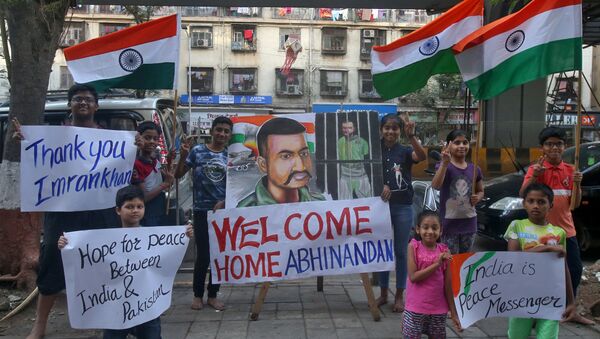 On Thursday, Pakistani Prime Minister Imran Khan announced that the pilot captured after the downing of an Indian Mig-21 fighter jet would be released "as a peace gesture."

Wing Commander Abhinandan Varthaman of the Indian Air Force has been finally handed over to India, two days after he was captured by Pakistan following the downing of his aircraft over the Kashmir region.

Finally Wing Commander #AbhinandanVarthaman is back home in #India. #Pak officials handed him over to #India at the #WagahBorder. Super News pic.twitter.com/46FvvUEOYv

In the meantime, the Pakistani government has issued a video of Varthaman's speech, where the latter praises "the professionalism of Pakistan Armed Forces."

​Earlier, conflicting reports said that the time of the procedure had been postponed until 9 p.m. local time.

Hundreds of Indian have gathered at the Attari-Wagah border to meet the pilot, who is welcomed like a hero.

#Abhinandan is on the way to india 😎😎 pic.twitter.com/tBZGwbbM4h

WATCH Parents of Captured Indian Fighter Pilot Cheered on Board Flight to Delhi
Pakistan claimed on Wednesday that it had downed two Indian warplanes which entered its airspace over the disputed Kashmir border, and captured an Indian pilot.

The announcement was made a day after Indian jets crossed into Pakistan to bomb a Jaish-e-Mohammed terror camp in the disputed region.

India's air raids in Pakistan came after a deadly terrorist attack, involving a car carrying over 100 pounds of explosives being detonated next to a security convoy, killing 45 Indian paramilitary officers.

India named Maulana Masood Azhar, the leader of the Jaish-e-Mohammed terrorist group residing in Pakistan, as the person responsible for ordering the attack and accused Pakistan of harbouring and protecting terrorists.

In turn, Pakistan rejected the allegations of its involvement in the attack.