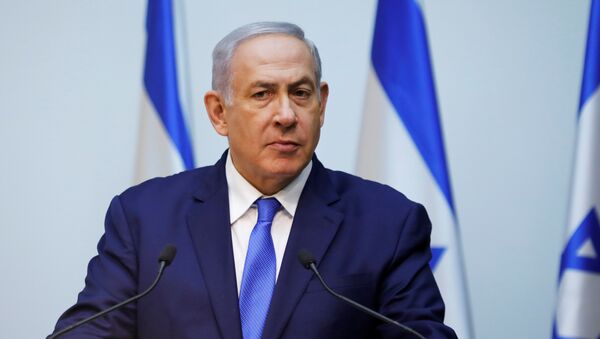 TEL AVIV (Sputnik) - Israeli Prime Minister Benjamin Netanyahu said on Thursday that he intended to win the upcoming parliamentary election and to remain in office for many years despite looming corruption charges against him.

Israeli Attorney General Avihai Mandelblit announced earlier in the day his intention to file three corruption charges against Netanyahu, including bribery, fraud and breach of trust. According to local media, Mandelblit will give Netanyahu the opportunity to argue against the indictment during pretrial hearings.

"I intend to keep working at my post… I am going to serve as prime minister for many more years. But it all depends on you, citizens of the State of Israel," Netanyahu said during his address to voters.

Israel's Attorney General Plans to Indict Netanyahu Pending Hearing - Reports
According to the prime minister, he has fallen victim of "witch hunt" aimed at affecting results of the elections.

Netanyahu stands accused of lobbying for Israel's telecom giant Bezeq and promising one of the largest newspapers, Yedioth Ahronoth, to deal with its rival in return for favorable coverage, as well as receiving gifts worth nearly $300,000 from businessmen.

The indictment comes more than a month ahead of the general election on 9 April. Netanyahu is seeking a fourth straight term and his fifth overall. He has denied the allegations. His defense team has unsuccessfully tried to prevent all announcements on the cases due to a possible impact on the outcome of the vote.