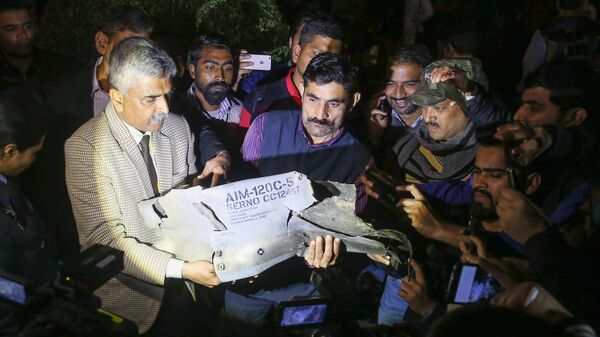 According to a deal with Washington, Islamabad is only permitted to use the US-made F-16 warplanes for counterterrorism operations, but India claims that it has violated the agreement.

India is sharing "detailed evidence" with the United States that Pakistan scrambled a US-made fighter jet, which was acquired under a "fight against terror" programme, in the recent Kashmir incident.

On Wednesday, Indian military brass confirmed in a statement to the media that a Pakistan Air Force F-16 had been downed during a dogfight with Indian jets over the Line of Control in Kashmir, despite Pakistan's claims that it hadn't lost any aircraft.

The Indian armed forces also displayed parts of a AMRAAM medium-range missile which was recovered in the Indian-controlled part of Kashmir; India alleges that they were fired by a Pakistani F-16.

"There is enough evidence to show that F-16s were used in this mission and Pakistan is trying to hide this fact," Air Vice Marshal RGK Kapoor told reporters.

Pakistan has been receiving F-16s from the United States since 1983, specifically for counterterrorism efforts, including missions over the tribal regions near Pakistan's border with Afghanistan, where the Taliban and Al-Qaeda were active.

In 2008, Washington shifted $230 million in aid to Islamabad from counter-terrorism programmes to updating its aging fleet of F-16s — a move that raised eyebrows in India.

And now, according to The Economic Times, India wants to provide the US with proof that Pakistan had been misusing the jets for offensive purposes in breach of the deal with Washington.

A spokesman for the Pakistan Armed Forces said on Friday that Chief of Army Staff General Qamar Javed Bajwa had discussed Indo-Pakistani tensions with the US, the UK, China and Australia.

According to Pakistan, it never deployed F16s in the Kashmir incident. Islamabad, meanwhile, claims that it has downed two Indian warplanes which violated its airspace.

The Wednesday incident came a day after India destroyed an alleged terror camp inside Pakistan in what is believed to be India's first airstrike on Pakistan since the 1971 war.

The terror camp, Delhi said, belonged to Jaish-e-Mohammed, the group behind the deadly terror attack on Indian paramilitary forces on 14 February.