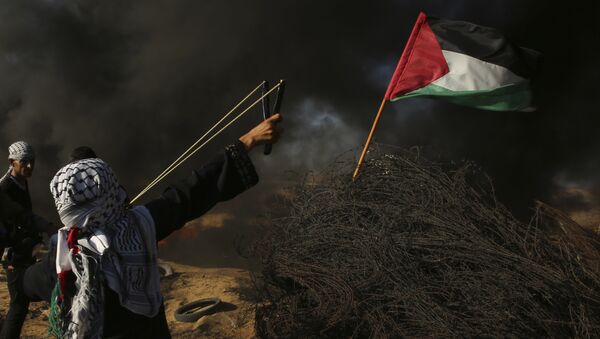 A United Nations commission report blasted Israel’s response to the March of Return protests in Gaza last year, saying Israeli forces may have committed war crimes. A human rights lawyer told Sputnik that doing so is imminent, once a country starts creating exceptions for itself in international law.

The UN Commission of Inquiry report was published Thursday by the UN and details how thousands of civilian Palestinian demonstrators were killed or maimed by the Israel Defense Forces (IDF) as a result of the service's rules of engagement, which regarded the protesters along the fence demarcating the Gaza Strip and Israel as fighters for Hamas, a militant group considered by Tel Aviv to be a terrorist organization, but which has governed the Gaza Strip since it won elections in 2006.

"The commission has reasonable grounds to believe that during the Great March of Return, Israeli soldiers committed violations of international human rights and humanitarian law," commission chairman Santiago Canton of Argentina said in a UN Human Rights Council press release titled "No Justification for Israel to Shoot Protesters with Live Ammunition."

"Some of those violations may constitute war crimes or crimes against humanity, and must be immediately investigated by Israel," he said.

"There can be no justification for killing and injuring journalists, medics, and persons who pose no imminent threat of death or serious injury to those around them. Particularly alarming is the targeting of children and persons with disabilities," said Sara Hossain of Bangladesh, another commission member. "Many young persons' lives have been altered forever; 122 people have had a limb amputated since 30 March last year. Twenty of these amputees are children."

The report estimates that as many as 23,000 Palestinians were injured by the IDF during the protests, while only 29 of the 189 Gazans killed in the event could be clearly identified as members of one of Gaza's armed political factions. The vast majority of the Palestinians killed "did not pose an immediate threat of death or serious injury to others when they were shot," the report says.

The report also mentions damage to civilian property in Israel, as well as psychological distress, caused by hundreds of incendiary kites and balloons launched by demonstrators from Gaza.

Prime Minister Benjamin Netanyahu said the report "set a new record for UN hypocrisy" and was "based purely on an obsessive hatred of Israel."

Netanyahu will soon be under investigation too, though, albeit for financial crimes. Israeli Attorney General Avichai Mandelblit announced Thursday the prime minister would soon face numerous charges, including bribery, fraud and breach of trust, just 40 days before a challenging election for the incumbent takes place.

Radio Sputnik's By Any Means Necessary spoke with human rights lawyer Jonathan Kuttab Thursday about the UN report. Kuttab said it "could be significant in laying down the groundwork for future sanctions against individual Israeli officers, and particularly policymakers, because the war crimes that are referred to are not just individual rogue soldiers sort of overstepping their instructions. These were very, very specifically given instructions that violated the rules of engagement, that violated the laws of war, that violated international law."

"The most important thing about international law is that it is universal," Kuttab said, noting that when a country starts creating exceptions for itself, "immediately that should alert you that there is something wrong, that they are trying to get away with some violation. As I said, Israel has been doing that all along."

"In the United Nations, in the Security Council, the US has been successful at shielding Israel from accountability by using its veto power. The ICC does not have a veto; nobody is exempt. I'm sure there are some ways that they will be able to apply pressure and make it difficult for the criminal court to take a serious position on this, but sooner or later it's going to happen. And they have been warning Israel, the special prosecutor of the ICC, the International Criminal Court, has already alerted Israel that ‘we are looking into this matter, that we are investigating crimes by both sides,' which is how it should be."

However, Kuttab said Israel has tried to frustrate the ICC's investigation by using what he calls "delaying tactics" or "procedural ways," noting: "They really do not want the criminal court to look into matters on several issues — not just on the issue of shooting civilians, but on other issues, Israel is totally exposed. For example, its apartheid policy. Apartheid is specifically mentioned, Article 3 of the charter of the ICC, as one of the bases for its jurisdiction."

"I think most Palestinians, like most oppressed people worldwide, are all the time wondering, ‘Where is the international community, where is international law?' And sometimes they despair and they say ‘International law means nothing,' because here Israel is getting away, literally, with murder, and there is no accountability. And it's important for us to keep telling them, ‘No, that's not true. It's true Israel gets away with things some of the time, but eventually it will catch up with them.'"

"I remind people that 25 years ago, Apartheid was a very powerful regime" in South Africa, Kuttab told Sputnik. "Today, you can't find a single person anywhere who's willing to admit that at one time or another, they supported Apartheid."

But Kuttab said that while for the moment, Israel is able to flout international law because the US covers for it, even Washington seems to be losing its patience with Tel Aviv in some respects. He noted how in December 2016, the US decided not to veto a UNSC resolution condemning Israeli settlements in Gaza, the West Bank and East Jerusalem, instead opting merely to abstain from the vote. The Israelis were shocked and horrified, he said.

"Israel is going to be surprised at some point by the United States suspending or refusing to provide continuously the umbrella against international law," he said. "Thoughtful Israelis are extremely worried, because they know this kind of policy is not sustainable long-term and that they cannot count on quiescence forever."

"They did not expect the March of Return. This did not happen by any deliberate planning by anyone; it was just ordinary people," he said, noting that only later did Hamas claim credit for it. "Initially this was a popular civil society attempt to deal with the ongoing crisis, the ongoing blockage of Gaza… I think Israel has a problem, and they don't know how to deal with it."

However, Kuttab cautioned that domestic pressure against Netanyahu "comes from his right."

"Even if Netanyahu were to leave the scene, we are not necessarily going to end up with anyone much better," Kuttab said, cautioning that people outside of Israel, especially in the United States, don't realize just how far to the right Israeli society has slid in recent years.