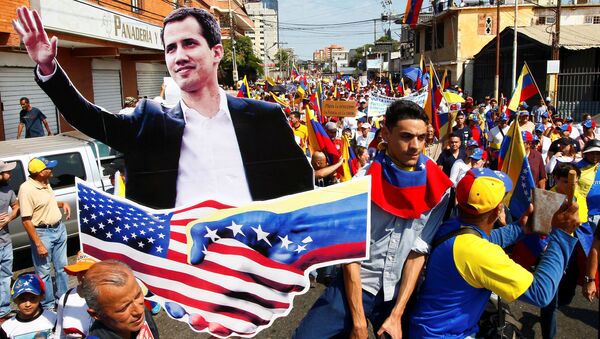 Nicolas Maduro's opposition among the Lima Group countries have made fools of themselves and failed to weaken the legitimate head of Venezuela, Telesur founder Aram Aharonian told Sputnik. For his part, Argentinian psychoanalyst Jorge Aleman opined that Venezuela has turned into a "collective emotional blackmail".

Although Washington's decision to recognise Juan Guaido as the interim president of Venezuela on 23 January 2019 caused a domino effect among US allies, they do not demonstrate any enthusiasm about launching a military operation against Caracas.

"The US does not have enough followers"" Aram Aharonian, the founder of Telesur, a Latin American TV network, told Sputnik Mundo.

Earlier US Vice President Mike Pence hinted at the possibility of a military scenario in Venezuela.

"To leaders around the world: it's time. There can be no bystanders in Venezuela's struggle for freedom. We hope for a peaceful transition to democracy, but as President Trump has made clear, all options are on the table," Pence told a regional summit in the Colombian capital of Bogota.

Morales Wonders Why US Seeks Dialogue With North Korea But Not Venezuela
However, despite their open opposition to the government of Nicolas Maduro, some countries of the Lima Group made it clear that they would not support a US military invasion of Venezuela.

Hamilton Mourao, Brazil's vice president and a retired general, emphasised that Brasília would not allow US intervention into Venezuela from its territory under any circumstances. Citing sources in Colombia's administration, The Guardian wrote that President Ivan Duque ruled out intervention along with Chile and Peru.

"Some members of the Lima Group have made a fool of themselves," Aharonian said. "In the so-called fourth-generation war, they fight with the help of lies, and those who invent it usually end up believing in it themselves. They not only failed to weaken Maduro, but they strengthened him".

Meanwhile, on the other side of the Atlantic, Maja Kocijancic, the spokeswoman for Federica Mogherini, the highest representative of the European Union for foreign affairs and security policy, called upon countries to "avoid a military intervention".

Stalled Coup: US' Allies May Soon Regret They Rushed to Embrace Guaido – Journo
"What is explicitly quite clear, from our point of view, is that we need a peaceful political and democratic and Venezuelan-owned resolution of this crisis. This obviously excludes the use of force," Kocijancic highlighted.

"The Caribbean Community does not recognise Guaido, despite the enormous pressure from the US; the European Union has begun to backpedal on its words; the United States failed to get ships from Aruba and Curaçao because the Netherlands resisted this. None of the neighbouring countries want to get involved in a large-scale conflict with Venezuela," Aharonian underscored.

"If they kill Maduro, will it all be over? Absolutely not," he added.

Aaronyan elaborated that in addition to sanctions and looting there, are serious problems in the Venezuelan economy. Given this, the strategy of military intervention in Venezuela under the leadership of the United States is losing its appeal, according to the scholar.

For his part, Argentinian psychoanalyst Jorge Aleman pointed out that Venezuela and the ideology of Chavism have fallen prey to a demonisation campaign.

"Venezuela is the scapegoat used by the right in Spain against Podemos, in France against Jean-Luc Mélenchon or against Jeremy Corbyn in the United Kingdom," he said. "Venezuela is a metaphor for evil, now the word Chavez and populism are also being demonised. If any project is not conciliatory towards the establishment from the start, it is accused of being populist. Venezuela was transformed into a kind of collective emotional blackmail."

Oil, Neocons, Monroe Doctrine: Author Explains Origins of Trump's Venezuela Plan
According to Aleman this campaign is aimed against alternative political movements that run counter to the current system.

"The conditions of capitalism have become so difficult to transform that a huge impotence has been generated," the psychoanalyst pointed out. "The Left are facing obstacles and their political actions are increasingly limited everywhere."

He opined that the term "democracy" turned into an empty shell, as the decisions that concern the people the most are not taken in a democratic way.

"The pact between capitalism and a postwar democracy has been broken, today there is only a simulacrum of democracy. In addition, the right wing is being disinhibited, so they no longer need to stay in shadow," Aleman suggested.

The political turmoil in Venezuela dramatically escalated on 23 January when Juan Guaido, the president of the disempowered National Assembly, declared himself interim president of the country. The US, along with many of its allies  in Latin America, Europe and Asia, recognised the self-proclaimed head of the state. After the US failed to force an aid convoy into Venezuela last week, Guaido urged the international community to keep "all options open" towards Caracas.