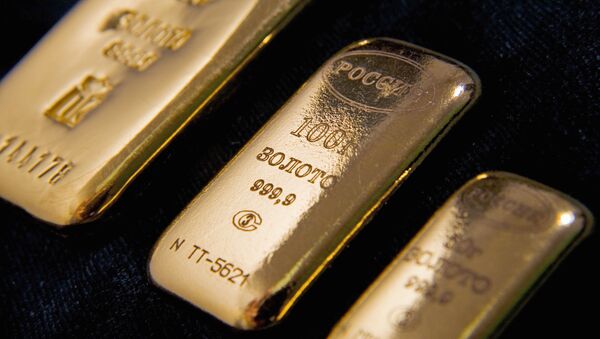 © Sputnik / Alexander Alpatkin
/
Go to the photo bank
Subscribe
Earlier, Bank figures showed that Russia added nearly to 275 tonnes of gold to its coffers in 2018, with total reserves climbing to over 2,100 tonnes of the precious metal.

Fresh figures on the price of gold in global trading have indicated that the precious metal continues to climb in value relative to other stores of value. Since mid-August 2018, prices have climbed from just under $1,196 per troy ounce to $1,327 per troy ounce this week.

Maduro Withdrew 8 Tonnes of Gold From Venezuela's Central Bank - Reports
Amid global economic instability, fears of a recession in the US in 2020, and concerns that the strong US dollar may grow even stronger, especially compared with the currencies of developing economies of countries like Russia, China, India and Turkey, gold is increasingly seen as an effective alternative to the greenback, particularly as countries, including Russia, seek to unload risks associated with US sanctions.

The jump in gold prices means that the Bank of Russia has earned somewhere in the neighbourhood of $10 billion, analysts have estimated, based on Russia's total gold holdings compared to rising prices. But the rising value is just a bonus. The central bank's declared strategy is aimed at diversifying reserves and insuring them against the threat of sanctions.

US' New Russia Sanctions Bill Bans Americans From Buying Russian Sovereign Debt
Russia accounted for nearly half of the whopping 651.5 tonnes of gold bought up by the world's central banks in 2018, purchasing some 274.3 tonnes of the precious metal, including by spending cash which was freed up after Moscow dumped tens of billions of dollars' worth of US debt obligations. Last year, the central bank's holdings of US T-bills, once a staple of Russia's reserves, dropped to just $14.8 billion, down from $176.3 billion in 2010.

As if to prove that the central bank's decision was the correct one, a bipartisan group of lawmakers introduced new legislation in the US Senate this week threatening to target Russian assets, companies and individuals with more sanctions, including a ban on operations involving Russian sovereign debt.

According to the World Gold Council, central bank purchases of gold were up 74 per cent last year compared to 2017, and the highest since 1971, after the US abandoned the gold standard.

Italy to Strengthen Control Over Gold Reserves Amid Venezuela's Problems With UK
Russia's vast mineral wealth, including gold output of roughly 300 tonnes per year, has enabled the central bank to stock up its reserves using purely domestic stocks. In 2018, central bank figures showed that the state bought up 274 of the 314 tonnes produced by Russian miners. Meanwhile, with the bank buying up nearly 90 per cent of total output, Russia's exports of the precious metal have dwindled, dropping from 56.6 tonnes in 2017 to 17.05 tonnes last year, according to the ministry of finance.

According to figures published last month, Russia's gold reserves jumped to 2,112 tonnes in 2018, putting the country in fifth place behind the US, Germany, Italy and France in terms of total reserves. If reserves continue to grow at their present pace, Russia may reach and surpass the record set by the USSR on the eve of the Second World War, when Moscow had accumulated 2,800 tonnes of the precious metal, in just a few years' time.