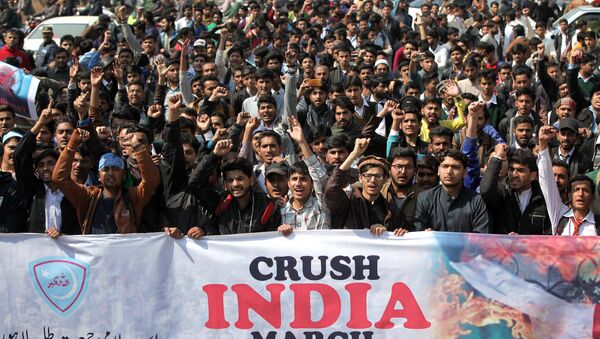 India and Pakistan have traded hostilities this week, with Islamabad saying it shot down two Indian warplanes and New Delhi insisting the count of downed aircraft is 1-1. Washington urged the two states to avoid further escalation and endorsed India's recent bombing raid on a terror camp inside Pakistan.

Pakistani Ambassador to the US Asad Majeed Khan said that Washington's failure to condemn India for the recent airstrike on Pakistan has played into the hands of New Delhi.

"It is construed and understood as an endorsement of the Indian position and that is what emboldened them even more," he told reporters on Wednesday.

With India and Pakistan mired in their worst crisis in decades, the envoy suggested that the US could have played a bigger role in easing the tension.

"There is perhaps no other country better placed than the United States to be able to play some role," Khan added.

Pakistan announced on Wednesday that it had downed two Indian warplanes, which entered its airspace over the disputed Kashmir border, and captured an Indian pilot.

The Indian Air Force confirmed later in the day that it had lost a MiG-21 fighter during the incident, but that a Pakistan F-16 jet had also been shot down.

This came a day after Indian jets crossed into Pakistan to bomb the biggest training camp of Jaish-e-Mohammed, a terror group which claimed responsibility for the 14 February suicide bombing of paramilitary forces in the India-governed part of Kashmir.

It is believed to have been the first time India conducted an airstrike in Pakistan since 1971, when a third war between the two states led to the secession of East Pakistan (now Bangladesh) from its western wing and the establishment of the so-called Line of Control in Kashmir — one of the most militarised zones in the world.

Commenting on India's airstrike on Tuesday, US Secretary of State Mike Pompeo described it as "counter-terrorism actions" and called on Pakistan to take "meaningful action against terrorist groups operating on its soil", while also urging the two countries to forgo further military action.

Pakistan's perceived lack of action against terrorists has been a major source of tension between Islamabad and Washington. Last year, the United States cut $800 million in aid to Pakistan, accusing the country of providing a "safe haven" to terrorists and militants active in neighbouring Afghanistan.