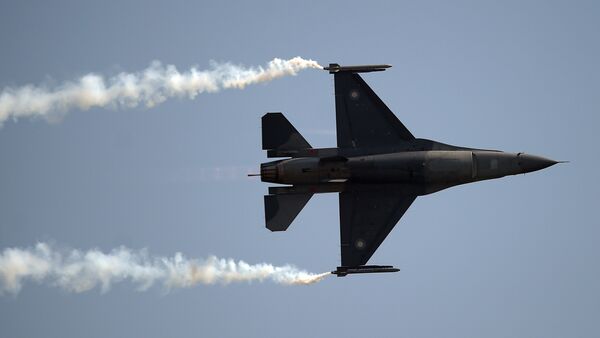 © AFP 2021 / AAMIR QURESHI
Subscribe
Tensions between India and Pakistan escalated this week after Pakistan reportedly shot down a pair of Indian Air Force (IAF) warplanes which flew into Pakistani-controlled territory in the contested province of Kashmir.

The IAF also showed the remnants of a US-made AMRAAM missile found on the Indian side of the border in Kashmir which was said to have been fired by a Pakistani F-16 during an attack on Indian military bases. Pakistan had earlier denied that it had used F-16 aircraft on Wednesday, and maintained that no Pakistani Air Force aircraft had been hit.

Visuals of cover of AARAM missile fired from Pakistani F-16 aircraft found near the LoC in India pic.twitter.com/qHdOm5cDqN

The AMRAAM is a medium-range, all-weather, day-night air-to-air missile used by Pakistan and manufactured by US defence giant Raytheon. The MiG-21 is a legacy fighter first introduced into the Soviet Air Force in 1959 and exported to dozens of countries around the world. India has upgraded versions of the plane, known as the MiG-21bis, which were produced until 1985, and which are expected to be retired in the early 2020s.

India to Continue Strikes if Necessary

The Indian Air Force noted that it was pleased with Pakistan's decision to return Indian Wing Commander Abhinandan Varthaman, and said that it looked forward to his safe return to India. The MiG-21bis pilot was captured by the Pakistani military on Wednesday and saved from an angry mob after Pakistan reported that it shot down two Indian warplanes operating in its airspace over Kashmir.

"We are extremely happyto have him back, we want to see him back…[but] we only see it as a gesture which is in consonance with all Geneva conventions," Vice Marshal Kapoor said.

India's Navy said it was put in a high state of readiness amid tensions between the two countries, with its surface, submarine and air components ready to 'deter and defeat' any 'misadventure' by Pakistan.

The air force reported that it had "fairly credible evidence" that its earlier raids on a Jaish-e-Mohammed* camp led to "massive damage," but said it would be premature to estimate casualties.

Love Not War: Two Best Friends Try to Fix Indo-Pakistani Crisis Online
According to Indian armed forces figures, the past two days have seen some 35 ceasefire violations by the Pakistani side on the line of contact separating Indian and Pakistani forces in the contested province of Kashmir.

Simmering tensions between India and Pakistan escalated on Tuesday after Indian Air Force fighters struck a camp belonging to the Jaish-e-Mohammed terrorist group on the Pakistani side of the border without Islamabad's permission. Tensions escalated Wednesday, when Pakistan reported that it had shot down two Indian jets on the Pakistani side of the border during a raid. The IAF confirmed having lost one of its jets. Islamabad accused New Delhi of violating its sovereignty with the air attacks, while the Indian side has charged Pakistan with refusing to tackle jihadist extremist groups on its territory.

Earlier this month, dozens of Indian security personnel were killed in a bombing attack in contested Kashmir. The Jaish-e-Mohammed terror group took responsibility for the attack. India has requested that Pakistan extradite the group's leaders.

On Wednesday, Indian Finance Minister Arun Jaitley suggested that his country's special forces should have the right to conduct operations against terrorist leaders in Pakistan, just as the US did in 2011 when it captured and killed al-Qaeda leader Osama Bin Laden. On Thursday, Prime Minister Narendra Modi urged Indians to "stand as a wall, as a rock" and unite as "the enemy seeks to destabilise India," without mentioning Pakistan by name.

*An al-Qaeda affiliated terrorist group outlawed in Russia and many other countries.