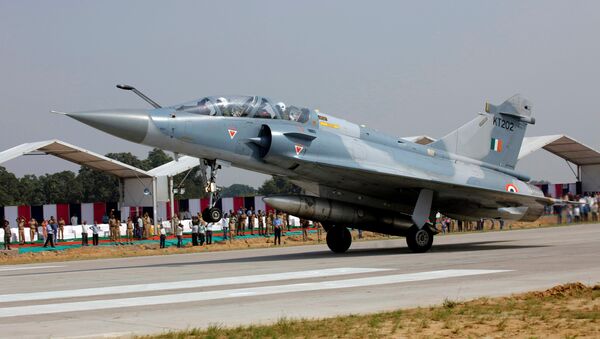 Ekaterina Blinova
All materialsWrite to the author
On 27 February, New Delhi and Islamabad found themselves engaged in a mounting conflict following India's air raid against the Jaish-e-Mohammed (JeM) terrorist group in Balakot. Speaking to Sputnik, military observer Rakesh Krishnan Simha outlined three reasons why the air clash won't lead to an all-out standoff.

The latest air clash over Kashmir between India and Pakistan is unlikely to get out of hand or lead to a nuclear confrontation, Rakesh Krishnan Simha, a journalist, foreign affairs analyst and military observer, told Sputnik.

"The latest clash won't spiral out of control," Simha opined. "Pakistan doesn't have the stamina or capacity for a fight".

"War involves attrition," he explained. "Each day the conflict rolls on, there will be losses of aircraft, tanks, guns, fuel, ammunition and human lives on both sides. However, India having a larger and better equipped military will be able to replace war losses rapidly. Pakistan's economy cannot replace its losses as rapidly as most of its weapons are grants from the US. It cannot replace its F-16 fleet as the US has ended its annual aid [in September 2018] that amounted to millions of dollars".

Second, the Pakistan Air Force (PAF) is "a comparatively outdated and badly equipped service", according to Simha.

He pointed out that in the 1999 Kargil War, PAF aircraft stayed 30 km away from the Line of Control (LoC) in Kashmir because of Combat Air Patrol (CAP) by the Indian Air Force (IAF) MiG-29s.

"While other Indian aircraft pounded the Pakistan Army on the mountains in both Indian and Pakistani held Kashmir, the PAF was powerless to stop them," he said. "In the [Indo Pakistan War] of 1971, the IAF blew away the PAF in the first week of the war. After the first week the PAF did not enter Indian airspace and were limited to air defence".

According to Simha, this narrative was spread by "Western academia and think tanks"

"This suits the West in whose eyes India is a long-term rival and Pakistan a useful, if unreliable, ally. Unfortunately, for decades India's political leadership, media and academia bought into this myth".

He noted that it is highly unlikely that Islamabad would resort to using nuclear weapons against India as it is aware that New Delhi would not sit idly by and suffer a Pakistani nuclear strike without symmetric retaliation.

Commenting on the recent air incident over Kashmir, the journalist elaborated that it was preceded by the 26 February air raid by 12 IAF Mirages. The IAF operation was aimed at destroying a major rest and recuperation facility for Jaish-e-Mohammed (JeM) terrorist group in Balakot in Pakistan Khyber-Pakhtunkhwa state. He noted that "around 300 terrorists are believed to have been killed".

India Has Right to Fight Terrorists in Pakistan Just Like US Does - Minister
However, Islamabad qualified IAF actions as violation of the country's sovereignty as India's warplanes crossed the LoC. According to Islamabad, two Indian aircraft were shot down during the 27 February aerial incident. For its part, India says it lost one MiG-21 and downed one PAF F-16 which Islamabad denies.

According to Simha, Pakistan's response to India's counter-terror operation "was predictable": "They had to something to assuage the public," he suggested.

"The question of PAF response being excessive doesn't arise," the journalist continued. "They tried to attack an Indian Army brigade headquarters using F-16s but were chased by MiG-21s with Sukhois providing CAP. One F-16 was shot down".

The military observer recalled that it is not the first time that the two countries had clashed in the disputed Kashmir region since 1971.

"In 1999 India attacked across the Line of Control to destroy the Northern Light Infantry in Pakistan-held Kashmir. The latest Balakot raid by the IAF is symptomatic of a new India that has clearly jettisoned its Gandhian aversion to war and is ready to retaliate with deadly force", the journalist concluded.