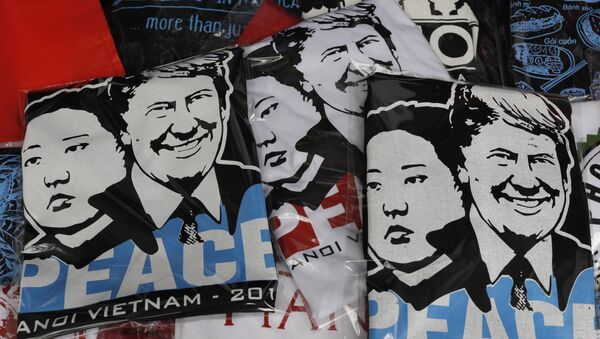 © AP Photo / Vincent Yu
Subscribe
Both North Korean leader Kim Jong-un and US President Donald Trump have arrived in Vietnam for their second summit. According to White House spokeswoman Sarah Sanders, Trump will meet Kim for a brief one-on-one conversation on Wednesday, followed by dinner together with their advisors.

On Thursday, the leaders will hold a series of meetings. North Korea’s denuclearization is expected to be on the agenda.
Sputnik has discussed the upcoming meeting with Robert Winstanley-Chesters, Research Fellow of Australian National University’s College of Asia and the Pacific, School of Culture, History and Language as part of Professor Tessa Morris-Suzuki’s Australian Research Council Laureate Fellowship project 'Informal Life Politics in North East Asia’.

Sputnik: Both Mr. Trump and Mr. Pompeo have attempted to tamp down expectations for the upcoming summit. What can we expect from this meeting?

'Large Disparity': Trump-Kim Hanoi Summit Unlikely to Break New Ground - Expert
Robert Winstanley-Chesters: Mike Pompeo in particular, he approached the subject that this summit could be reduced from two days to one day; and I think we should expect that – I know that people are focusing more on trying to get concrete ideas about what denuclearization means, some of the more concrete plans for organising the reduction in North Korea’s nuclear material, but I don’t really think that will happen at this summit – I think we’re more likely to see something dramatic but less detailed, such as a declaration to end the Korean War, which I know is something that North Korea has long wanted.

So I think because Trump is not a man so much for the details, I think we’re more likely to see some sort of large things like that; but not so spectacular, perhaps, as the last meeting in Singapore.

Sputnik: According to reports, the US negotiators have been looking into non-economic incentives for Pyongyang. In your view, how progressive can they be?

But I think what we could expect in this is some sort of allowance or a nod, if you like, to South Korea and North Korea to engage in some of the inter-Korean development that they really want to do, such as opening the railways again, and the Kaesong complex and the Kumgang tourist zone. Because the Americans seemed a little bit concerned about that and negative about that when they were first broached and both Koreas are very keen to do that.

That would allow a little bit of forward movement on both sides.

Trump-Kim Summit: North Korea Seeking Guarantee of No More Nuclear Threats
Sputnik: Earlier Kim Jong-un stated that Pyongyang would denuclearise if Washington removed its troops from South Korea; however, President Trump said that this option was not on the table. How likely is it that both leaders will negotiate something on this?

Robert Winstanley-Chesters: North Korea will always ask for this. For North Korea, denuclearisation of the Korean Peninsula means not simply the United States removing its nuclear threat over the area and essentially withdrawing their nuclear umbrella back across the Pacific, but it also means withdrawing the tens of thousands of American troops from South Korea.

North Korea will always talk about this. The United States would be, I guess, concerned because doing so would destabilise its relationship with Japan. But I think we’ve seen in recent months that President Trump really likes being able to take American troops home from places because the job is done so to speak; in their perception, it's a big vote winner, very popular in America, and a sign for Trump that he is doing something [and] achieving things.

So, it’s unclear whether he will really be able to offer that, but the North Koreans will always ask and they will always attempt to negotiate on this.

Sputnik: Pyongyang has also been calling for an easing of sanctions. Is there any possibility that the United States will soften their stance on this issue?

Robert Winstanley-Chesters: I think, having said all of this, that we know that Donald Trump appreciates the ability to use pressure in a situation, and he feels that having the sanctions behind him allows a little bit more pressure; that’s his whole approach to thinking about North Korea.

Study: Enough Uranium, Plutonium For 5-7 Nukes Made in North Korea Last Year
But I think that we can never discount things, but as I said before, the sanctions that America has on North Korea itself are very tightly framed by a very complex set of laws passed by the Congress and the House of Representatives in 2017, so it’ll be quite practically difficult for America to relax its own sanctions.

But I think we could see America allowing other people to relax sanctions if you like, or putting less pressure on China, for example, on allowing North Korean goods and trade into China.

I’m sure America could, while not relaxing sanctions itself, perhaps allow other countries, such as China or even Russia with the coal shipped through Rason, to be a little less strict.

Sputnik: Earlier you mentioned that Seoul and Pyongyang might be able to agree to a formal end of the Korean War. How likely is that to happen?

Robert Winstanley-Chesters: The interesting thing is that Seoul cannot itself end the Korean War because Seoul was bizarrely in a way not an on-paper participant in the Korean War; it was a United States and a United Nations war.

So, of all of the things I would see, although it sounds rather dramatic, of all the things that might happen out of this summit, I think that’s possibly one of the more likely.

Views and opinions expressed in this article are those of Robert Winstanley-Chesters and do not necessarily reflect those of Sputnik.

000000
Popular comments
He is not Saddam nor Qaddafi. He knows that his nukes are is gurantee and he knows to play deceptive games that Americans are known for.