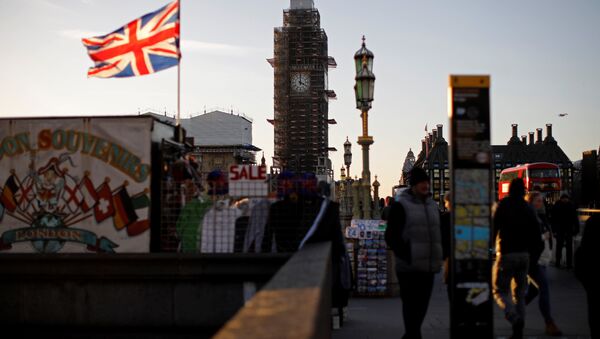 LONDON (Sputnik) - The UK economy will survive a no-deal Brexit scenario, but this will undoubtedly cause some disruptions for national business, UK Secretary of State for International Trade Liam Fox said Wednesday.

"We don't want a no-deal, which while obviously survivable, will cause unnecessary disruption for business and for our economy. Business should not want a no-Brexit," Fox said during his address to the International Petroleum Week conference in London.

Fox, in particular, expressed hope that the United Kingdom would leave the European Union with a deal that would maintain maximum access to the EU market for UK companies as well as allow London to implement an independent trade policy.

"I want to see us leave the European Union with a deal, a deal that maximizes our access to those European markets that currently constitute 44 percent of British exports, but also allows us to operate an independent trade policy and maximize our growing opportunities outside Europe," the trade secretary stressed.

The United Kingdom will not use its withdrawal from the European Union as a pretext to lower environmental standards since the fight against climate change is prescribed by the country's laws, Liam Fox stressed.

"We are not and will not use Brexit as a means or an excuse in any way to lower environmental standards. The United Kingdom is legally committed to reducing greenhouse gas emissions by 80 percent between 1990 and 2060 and it is part of our domestic law about the climate change, not the EU law," Fox said during his address to the International Petroleum Week conference in London.

Fox, in particular, admitted that renewable energy sources were "better" than fossil duels, but noted that gas played an important role in decarbonization as it burned nearly twice as efficiently as coal.

According to the Sky News report, citing board papers disclosed by more than 130 UK hospital trusts, National Health Service (NHS) hospitals are preparing for shortages in staff and medicine in the case of a no deal exit from the European Union.

"In the event of a no-deal EU exit adversely affecting supply chains it may be necessary for the trust to consider prioritization of key services and cancellation of non-critical services," Sky News reported, citing The Dudley Group NHS Foundation Trust documents disclosed after a freedom of information request.

ECB President Draghi Criticises Brexit, Says EU Protects Members’ Sovereignty
Another trust was cited as considering extra security at its pharmacy because it was worried about an "increased risk of burglary" due to medicine shortages.

The United Kingdom is set to leave the European Union on March 29. While London has managed to negotiate a withdrawal deal with Brussels after months of intense talks, the agreement has faced a wave of criticism in the United Kingdom and mounting calls for a second Brexit referendum, with the parliament so far refusing to endorse the deal due to the controversial provision on the Irish border backstop.