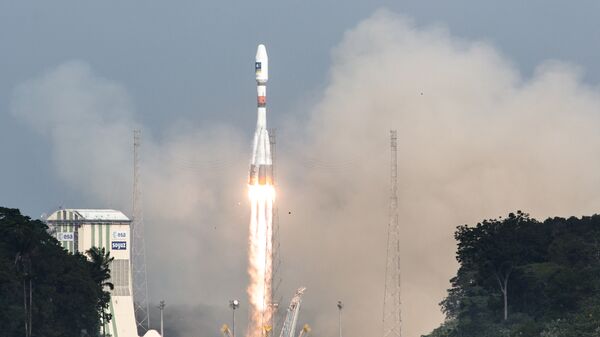 PARIS (Sputnik) - The Russian Soyuz rocket, carrying the first six UK satellites for the OneWeb project, successfully blazed off from the Kourou spaceport in French Guiana, the live broadcast of the launch on the Arianespace launch service provider's website showed.

"Lift off 4:37pm EST [21:37 GMT] #OneWebLaunch", OneWeb wrote on Twitter. The rocket is expected to bring the satellites to the low-Earth orbit.

The launch of OneWeb satellites was originally planned for 20 February, but it was postponed to 27 February due to the discovery of a seam rupture in a pipeline that supplies helium to fuel tanks of the Fregat booster on the Soyuz-ST carrier rocket at the end of January during the launch preparation at the Kourou cosmodrome.

The launch was postponed once again to 28 February due to the non-nominal behavior of the third stage of the Soyuz-2.1b rocket when the Egyptian EgyptSat-A satellite was launched on 21 February.

OneWeb plans to create a constellation of satellites that will provide broadband Internet access to users around the world, fully covering the Earth surface.

In total, according to OneWeb Founder and Executive Chairman Greg Wyler, the company plans to put nearly 2,000 satellites into orbit to provide global broadband Internet access, but 600 of them will be enough at the first stage. OneWeb's investors include Virgin Group, SoftBank, Airbus, Qualcomm and Coca-Cola.

Sprint, OneWeb to Bring 8,000 Jobs to US - Trump
In June 2015, Roscosmos signed with OneWeb and French company Arianespace a contract for 21 commercial launches of 672 satellites on Soyuz launch vehicles with Fregat boosters from Kourou, Baikonur and Vostochny spaceports.

Last year, according to media reports, it turned out that the company had problems with licensing necessary frequencies in Russia, facing the opposition of the Federal Security Service (FSB) and telecommunications watchdog Roskomnadzor. Despite this, Roscosmos chief Dmitry Rogozin said that the cooperation of his corporation with OneWeb would continue.

RSC Progress chief Dmitry Baranov said that Russia had received almost $1 billion in advance for launching OneWeb satellites atop Soyuz launch vehicles, so there is no economic reason to refuse to launch them.