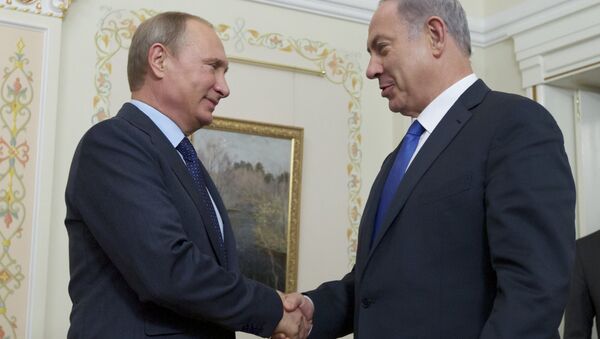 MOSCOW (Sputnik) - Russian President Vladimir Putin will hold a meeting with Israeli Prime Minister Benjamin Netanyahu in Moscow on Wednesday, and the sides will discuss a wide range of bilateral and Middle East issues.

The visit was originally scheduled for 21 February, but was postponed at the request of the Israeli side. Kremlin spokesman Dmitry Peskov told Sputnik that the two leaders would, in particular, discuss the Syrian conflict resolution.

"The sides plan to discuss urgent issues of bilateral cooperation, primarily in the trade, economic and humanitarian spheres, as well as exchange views on the current situation in the Middle East, including problems of Palestinian-Israeli settlement and the situation in Syria", the Kremlin said in a statement Tuesday.

Earlier in February, Netanyahu said that he also intended to discuss Iran's military presence in Syria with the Russian president as well as the issue of strengthening of the coordination mechanism in order to prevent friction between the Israeli and the Russian military.

If Israel Continues Attacks in Syria, Iran Will Respond - Security Council Head
This will be the first Netanyahu's visit to Moscow after the fatal crash of the Russian Il-20 plane in Syia in September 2018.

Moscow-Tel Aviv relations were put to test following the fatal crash of the Russian Il-20 plane in 2018. The plane was downed on 17 September by a missile launched by Syria's air defense system targeting Israeli F-16 jets that were carrying out airstrikes in Syrian Latakia province. The incident claimed the lives of 15 Russian servicemen.

In response to the crash, the Russian Defense Ministry blamed the Israeli Air Force, claiming that Israeli jets used Russian aircraft as a shield to protect themselves from the Syrian air defense systems.

READ MORE: Two Rivals, One Bloc: Analyst on How Israel, Iran Will Work With Russia-Led EAEU

Since that time, Russia and Israel have repeatedly discussed on different levels the operation of the bilateral communications channel between the Russian Hmeimim airbase in Syria and the Israeli Air Force to prevent incidents.